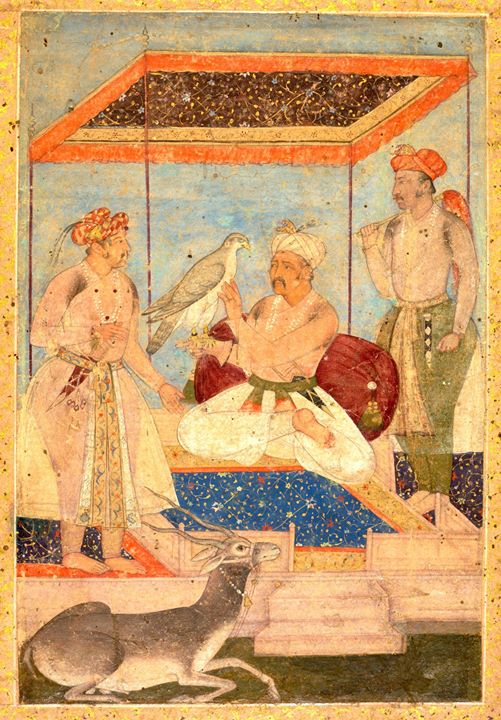 Digital Rare Book:
The AIN I AKBARI
By Abul Fazl Allami
Translated from the Original Persian by
Colonel Henry Sullivan Jarrett
Published by The Asiatic Society of Bengal, Calcutta - 1891
Volume 2

The Ain-i-Akbari (Persian: Ø¢Ø¦ÛŒÙ†Ù Ø§Ú©Ø¨Ø±ÛŒâ€Ž) or the "Administration of Akbar", is a 16th-century detailed document recording the administration of the Mughal Empire under Emperor Akbar, written by his court historian, Abu'l Fazl. It forms Volume III and the final part of the much larger document, the Akbarnama (Account of Akbar), also by Abu'l-Fazl, and is itself in three volumes.

It is now in the Hazarduari Palace, in West Bengal.

The Ain-i-Akbari is the third volume of the Akbarnama containing information on Akbar's reign in the form of administrative reports, similar to a gazetteer. In Blochmann's explanation, "it contains the 'ÄÄ«n' (i.e. mode of governing) of Emperor Akbar, and is in fact the administrative report and statistical return of his government as it was about 1590."

The Ain-i-Akbari is divided into five books. The first book called manzil-abadi deals with the imperial household and it's maintenance, and the second called sipah-abadi, with the servants of the emperor, military and civil services. The third deals with imperial administration, containing regulations for the judiciary and the executive. The fourth contains information on Hindu philosophy, science, social customs and literature. The fifth contains sayings of Akbar, along with an account of the ancestry and biography of the author.

Volume 1
The volume has a total of 90 'Ain' or Regulations dealing and describing the different segments of administration and occupations at that time. The various ains include the one on the imperial mint, its workmen and their process of refining and extracting gold and silver, the dirham and the dinar etc. There are also portions dedicated to the Imperial Harem (Ain 15), the royal seals (Ain 20), the imperial kitchen (Ain 23) and its recipes and the rules relating to the days of abstinence (Ain 26). The volume contains a detailed description of the trade/business of items such as fruits, vegetables, perfumes, carpets etc. and also of art and painting. Ain-i-Akbari is an excellent resource of information on the maintenance of the Mughal army during Akbar's reign. Ain 35 onwards deals with the use and maintenance of artillery, upkeep and branding of royal horses, camels, mules and elephants, describing even the detail of the food given to animals. The volume also has regulations pertaining to the wages of labourers, estimates of house building etc.

Volume 2
The second book treats of the servants of the throne, the military and civil services, and the attendants at court whose literary genius or musical skill received a great deal of encouragement from the emperor, and who similarly commend the high value of their work.

Volume 3
The third book is entirely devoted to regulations for the judicial and executive departments, the establishment of a new and more practical era, the survey of the land, the tribal divisions, and the rent-roll of the finance minister.

Volume 4
The fourth book treats of the social condition and literary activity, especially in philosophy and law, of the Hindus, who form the bulk of the population, and in whose political advancement the emperor saw the guarantee of the stability of his realm. There are also a few chapters on the foreign invaders of India, on distinguished travellers, and on Muslim saints and the sects to which they belong.

Volume 5
The fifth book contains moral sentences and epigrammatical sayings, observations, and rules of wisdom of the emperor collected by Abu'l Fazl.

Credit: The Cleveland Museum of Art

Akbar biggest traitor ever .. did this book mention when he invited thousands of saints sadhus for a festival in his palace garden then after he sended his troops to annihilate all... there is a big lie that want to paint that akbar was the most "tolerant" muslin ruler .. its a lie its just another fake fabricated propaganda . Akbar was just another fake personality ... we akharas and sampradayas still have the records of the atrocitys that akbar did . We have the letters the paintings the dates the locality . Akbar was a fraud

Rare Book Society of India, could U pls post the remaining three volumes of Ain-I-Akbari ???