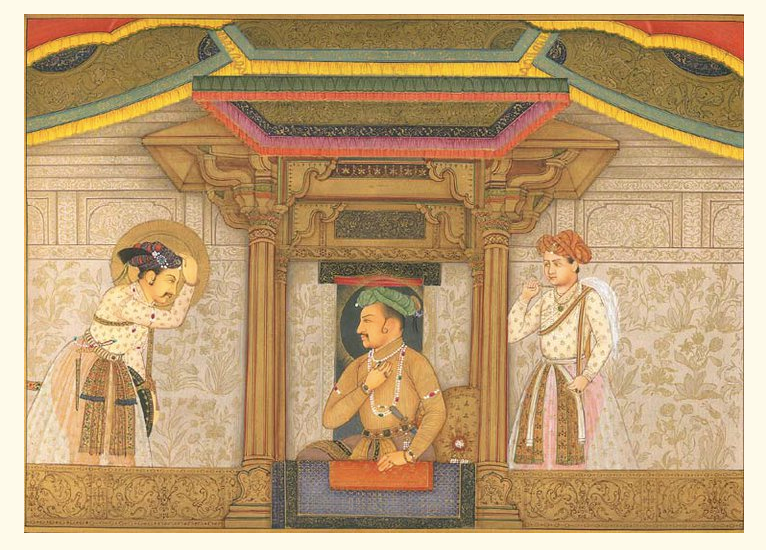 Digital Rare Book :
Memoirs of the Emperor Jahangueir
Written by Himself
Translated from a Persian Manuscript
By Major David Price
Sold by J.Murray, London - 1829

"....As at the very instant that I seated myself on the throne the sun rose from the horizon, I accepted this as the omen of victory, and as indicating a reign of unvarying prosperity. Hence I assumed the titles of Jahangueir Padshah, and Jahangueir Shah : the world-subduing emperor ; the world-subduing king. I ordained that the following legend should be stamped on the coinage of the empire : " Stricken at Agrah by that Khossrou, the safeguard of the world ; the sovereign splendour of the faith, Jahangueir, son of the imperial Akbar."

On this occasion I made use of the throne prepared by my father, and enriched at an expense without parallel, for the celebration of the festival of the new year, at the entrance of the sun into Aries. In the fabrication of the throne a sum not far short of ten krours** of ashrefies,* of five mithkals the ashrefy, was expended in jewels alone ; a krour being the term for an hundred laks, and a lak being one hundred thousand, independently of three hundred maunns of gold, Hindustanny measure, employed in the workmanship, each maunn of Hind being equal to ten maunns of Irak. For the convenience of removal from place to place the throne was, moreover, so constructed, that it could be easily taken to pieces, and again put together at pleasure. The legs and body of the throne were at the same time loaded with fifty maunns of ambergris, so that wherever it might be found expedient to put it together, no further perfumes were necessary, for an assemblage of whatever magnitude.

Having thus seated myself on the throne of my expectations and wishes, I caused also the imperial crown, which my father had caused to be made after the manner of that which was worn by the great kings of Persia, to be brought before me, and then, in the presence of the whole assembled Ameirs, having placed it on my brows, as an omen auspicious to the stability and happiness of my reign, kept it there for the space of a full astronomical hour. On each of the twelve points of this crown was a single diamond of the value of one lak of ashrefies of five mithkals, the whole purchased by my father with the resources of his own government, not from any thing accruing to him by inheritance from his....

Calculating the ashrefy as before, at fifteen rupees, this would make the value of each diamond 150,000 sterling, which multiplied by twelve will give the enormous sum of 1,800,000.

Book extract: "...I instituted twelve special regulations, to be applied by the different functionaries of the empire as rules of conduct, never to be deviated from in their respective stations. 5. No person was permitted either to make or sell either wine or any other kind of intoxicating liquor. I undertook to institute this regulation, although it is sufficiently notorious that I have myself the strongest inclination for wine, in which from the age of sixteen I have liberally indulged. And in very truth, encompassed as I was with youthful associates of congenial minds, breathing the air of a delicious climate ranging through lofty and splendid saloons, every part of which decorated with all the graces of painting and sculpture, and the floors bespread with the richest carpets of silk and gold, would it not have been a species of folly to have rejected the aid of an exhilarating cordial and what cordial can surpass the juice of the grape? May it not happen that theriauk, or opiates, or stimulants, have been rendered habitual to the constitution and heaven forbid that this should deprive a man of the most generous feelings of his nature. With some acknowledged beneficial effects, it must however be confessed, that these indulgences to excess must expose a man's infirmities, prostrate his constitutional vigour, and awaken false desires, such being the most injurious properties belonging to the list of stimulants. At the same time, we cannot but remember that kelourica is brother's son to theriauk. For myself, I cannot but acknowledge that such was the excess to which I had carried my indulgence, that my usual daily allowance extended to twenty, and sometimes to more than twenty cups, each cup containing half a seir (about six ounces), and eight cups being equal to a maunn of Irak. So far, indeed, was this baneful propensity carried, that if I were but an hour without my beverage, my hands began to shake and I was unable to sit at rest. Convinced by these symptoms, that if the habit gained upon me in this proportion my situation must soon become one of the utmost peril, I felt it full time to devise some expedient to abate the evil : and in six months I accordingly succeeded in reducing my quantity gradually from twenty to five cups a day. At entertainments I continued, however, to indulge in a cup or two more : and on most occasions I made it a rule never to commence my indulgence until about two hours before the close of the day. But now that the affairs of the empire demand my utmost vigilance and attention, my potations do not commence until after the hour of evening prayer, my quantity never exceeding five cups on any occasion ; neither would more than that quantity suit the state of my stomach. Once a day I take my regular meal, and once a day seems quite sufficient to assuage my appetite for wine ; but as drink seems not less necessary than meat for the sustenance of man, it appears very difficult, if not impossible, for me to discontinue altogether the use of wine. Nevertheless, I bear in mind, and I trust in heaven that, like my grandfather Homayun, who succeeded in divesting himself of the habit before he attained to the age of forty-five, I also may be supported in my resolution, some time or other to abandon the pernicious practice altogether. " In a point wherein God has pronounced his sure displeasure, let the creature exert himself ever so little towards amendment, and it may prove, in no small degree, the means of eternal salvation."