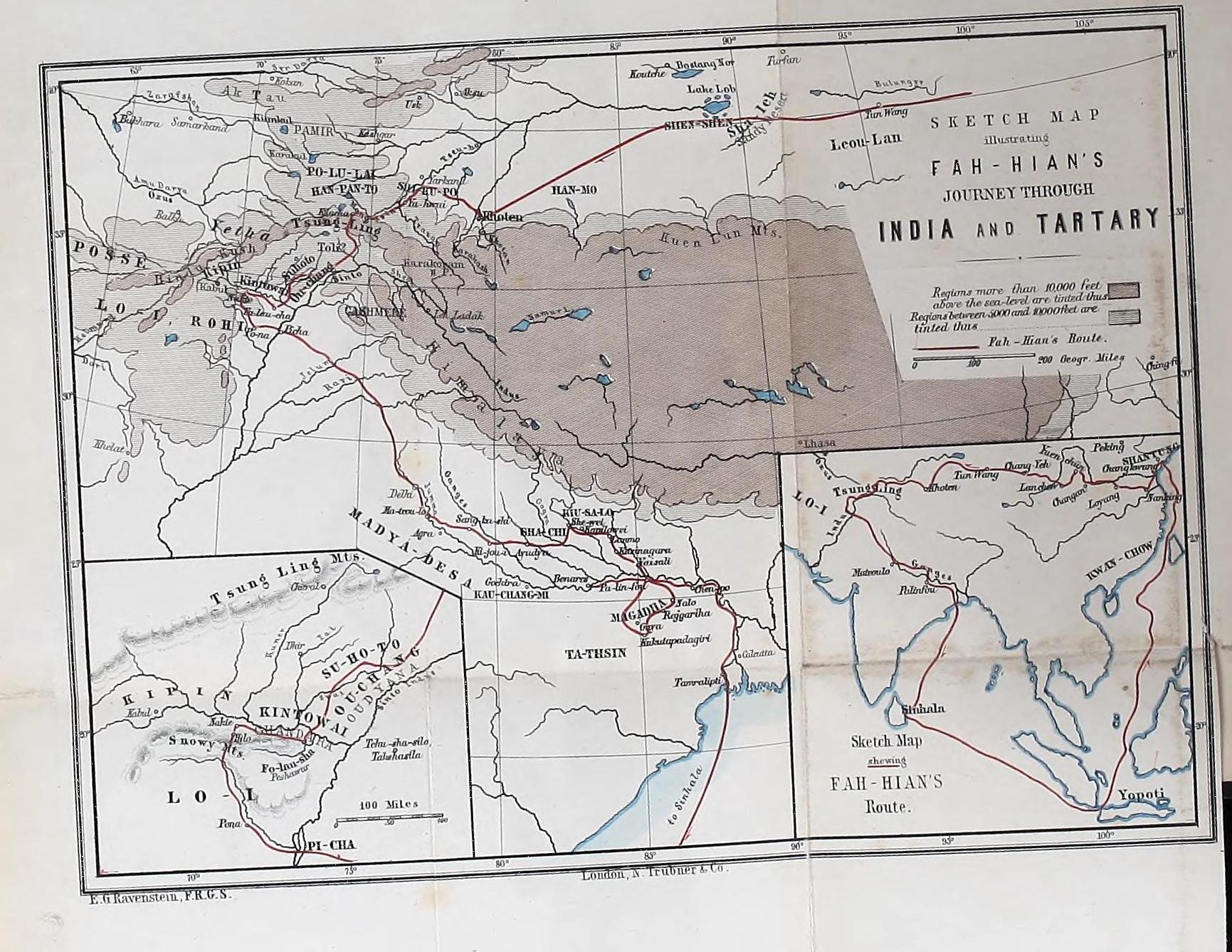 Digital Rare Book:
Travels of Fah-Hian and Sung-Yun
Buddhist pilgrims from China to India (400 A.D. and 518 A.D.)
Translated from the Chinese by Samuel Beal
Published by Trubner & Co., London - 1869

Faxian (337 CE â€“ c. 422 CE) was a Chinese Buddhist monk and translator who traveled by foot from China to India, visiting sacred Buddhist sites in Central, South and Southeast Asia between 399 and 412 to acquire Buddhist texts. He described his journey in his travelogue, A Record of Buddhist Kingdoms.

Other transliterations of his name include Fa-Hien and Fa-hsien.

In 399 CE, Faxian set out with nine others to locate sacred Buddhist texts. He visited India in the early fifth century. He is said to have walked all the way from China across the icy desert and rugged mountain passes. He entered India from the northwest and reached Pataliputra. He took back with him Buddhist texts and images sacred to Buddhism. He saw the ruins of the city when he reached Pataliputra.

Faxian's visit to India occurred during the reign of Chandragupta II. He is also renowned for his pilgrimage to Lumbini, the birthplace of Gautama Buddha (modern Nepal). However, he mentioned nothing about Guptas. Faxian claimed that demons and dragons were the original inhabitants of Sri Lanka.

In particular, the ability to obtain copies of books on Theravada and pure Buddhism from Sri Lanka, as well as the knowledge gained from discussions with eminent scholars maha thera on Sri Saddharma, is the most significant source of knowledge gained during the visit.

On Faxian's way back to China, after a two-year stay in Ceylon, a violent storm drove his ship onto an island, probably Java. After five months there, Faxian took another ship for southern China; but, again, it was blown off course and he ended up landing at Mount Lao in what is now Shandong in northern China, 30 kilometres (19 mi) east of the city of Qingdao. He spent the rest of his life translating and editing the scriptures he had collected.

Faxian wrote a book on his travels, filled with accounts of early Buddhism, and the geography and history of numerous countries along the Silk Road as they were, at the turn of the 5th century CE. He wrote about cities like Taxila, Pataliputra, Mathura, and Kannauj in Middle India. He also wrote that inhabitants of Middle India also eat and dress like Chinese people. He declared Patliputra as a very prosperous city.

He returned in 412 and settled in what is now Nanjing. In 414 he wrote (or dictated) Foguoji (A Record of Buddhistic Kingdoms; also known as Faxian's Account). He spent the next decade, until his death, translating the Buddhist sutra he had brought with him from India.

Samuel Beal (27 November 1825, in Devonport, Devon â€“ 20 August 1889, in Greens Norton, Northamptonshire) was an Oriental scholar, and the first Englishman to translate directly from the Chinese the early records of Buddhism, thus illuminating Indian history.

In September 1872 he was appointed to examine the Buddhist Chinese books in the India Office Library, London. Of the Chinese language books held by the library, Beale found 72 Buddhist compilations across 112 volumes. His research illustrated key philosophical differences between Indian and Chinese Buddhism. An example was the Chinese version of the Indian MahÄparinibbÄá¹‡a Sutta. Beale's exegesis of the Chinese narrative revealed a key doctrinal divergence from the Indian version, and therefore between Northern and Southern Asian Buddhism, namely that Nirvana is not the cessation of Being but its perfection.

Beale's reputation was established by his series of works which traced the travels of the Chinese Buddhists in India from the fifth to the seventh centuries AD, and by his books on Buddhism, which have become classics.