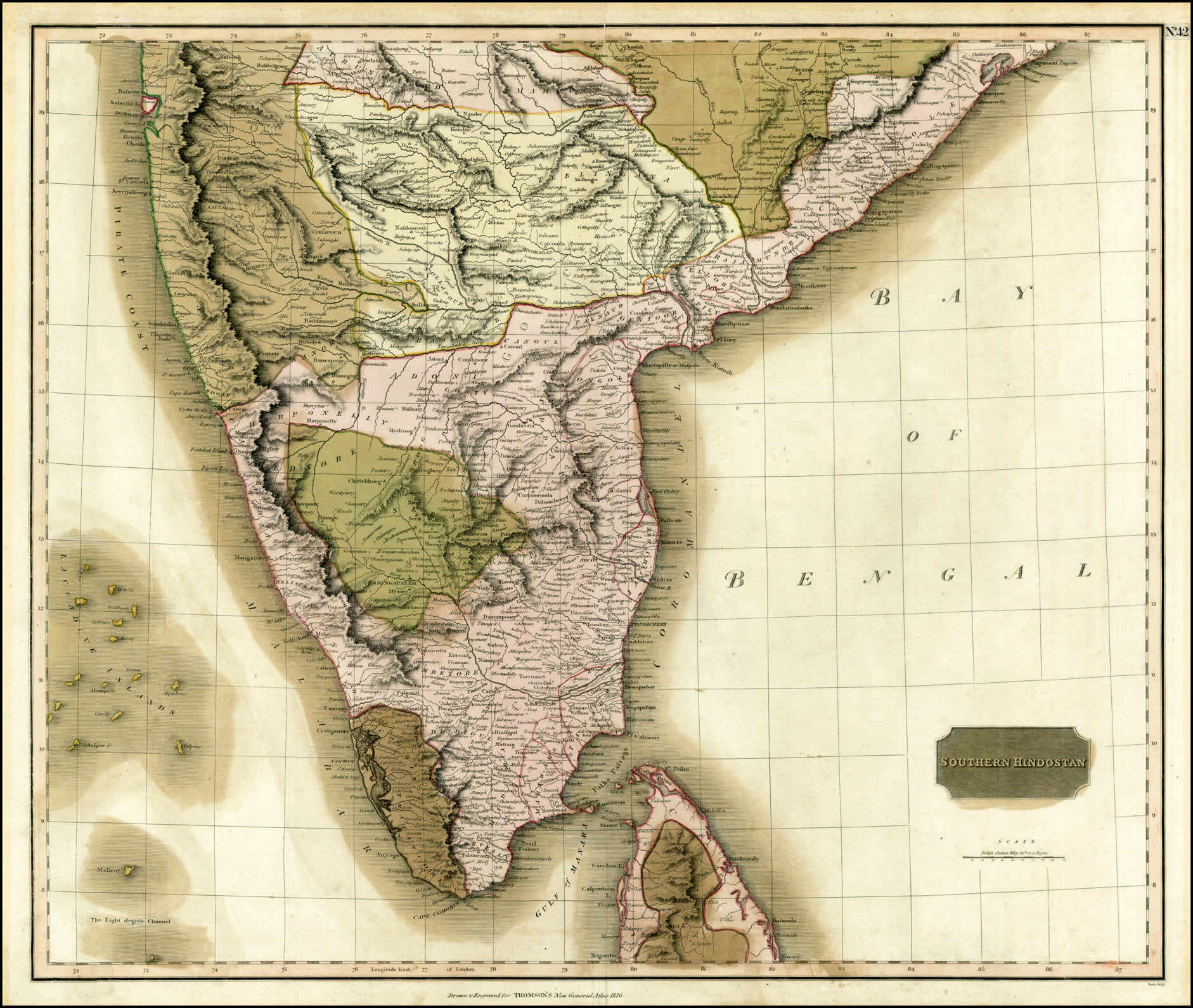 Digital Rare Book:
Historical sketches of the south of India, in an attempt to trace the HISTORY OF MYSOOR, from the origin of the Hindoo government of that state, to the extinction of the Mohammedan dynasty in 1799
By Lieut. Col. Mark Wilks
Printed for Longman, Hurst, Rees & Orme, London - 1817
Volume 2

Colonel Mark Wilks FRS (1759â€“1831) was a Manx soldier, historian and East India Company administrator who worked in southern India principally in the princely state of Mysore. He was the acting Resident at the Wodeyar Court.

He was born in the Isle of Man, the son of Rev. James Wilks and Elisabeth Christian, and came from a lineage of Manx gentry. He purchased cadetship through Sir Henry Fletcher, in the court of the Directors of the East India Company in 1781 at the age of 18, joining the Madras Army. He was commissioned an officer in 1782 and like others, he was trained at Fort St. George, he picked up Persian. He translated the Persian poet Nasir-ud-din's work Aklak-i-Naseri into English. Wilks served as a secretary to the Military Board in 1787, accompanying Sir Barry Close on a diplomatic mission to Mysore. His early education included Greek and Latin classics which and he would later in life promote its study by his nephew Mark Cubbon. He served as the Town Major at Fort Saint George around 1788, the capital of Madras Presidency. After a furlough in England Wilks became a private secretary to Lord Edward Clive. Wilks served alongside General James Stuart during the storming of Srirangapatna resulting in the death of Tipu Sultan in May 1799. He was sent to Basra and returned in 1803 to India to be appointed Resident at Mysore.

He wrote several historical works including, Report on the Internal Administration of Mysore. This was a continuation of a report on the survey of the Kingdom of Mysore undertaken by Lieut. Col. Colin Mackenzie. He also wrote the book Historical Sketches of the South of India in an attempt to trace the History of Mysoor. This also relates to the works of Lieut. Col. Colin Mackenzie. Mark Wilks was the uncle of Mark Cubbon who was the Commissioner of Mysore and after whom the Cubbon Park in Bangalore is named.

After his return from India, Mark Wilks, with the active help and co-operation of James Kirkpatrick, the East India Company (EIC) Resident at Hyderabad, wrote one of the first histories of medieval South India: Historical Sketches of the South of India. This volume examined the rise of the Mysore Wodeyar dynasty in the confusion following the fall of Vijayanagara in 1565. Wilks denounced the reign of Haidar Ali and Tipu Sultan in his historical enquiries and sought to find the causes for the decline of the Vijaynagar Empire.

In 1813 he was appointed Governor for three years of Saint Helena where the exiled former French Emperor Napoleon is said to have found Wilks a highly engaging and affable man. Saint Helena was chiefly a center for slave trade and as Governor he did not outlaw it but he is thought to have taken a sympathy for Samuel Ally, a freed slave. Wilks invited William Roxburgh to study the possibility of cultivating cinchona. After the British government took temporary control of St Helena from the EIC during Napoleon's time on St Helena, Wilks return to England in 1816 and was elected to the Manx parliament, the House of Keys. In 1826, after the death of his father-in-law, he became Speaker of the house. A portrait of Mark Wilks still hangs in the Tynwald building in Douglas.

In February 1826, as Colonel Mark Wilks, he was elected a Fellow of the Royal Society.

Fine old color example of Thomson's regional map of India, extending from Arungabad, Mahoor and Cicacole in the North, to the southern tip of India, including most of Celyon.