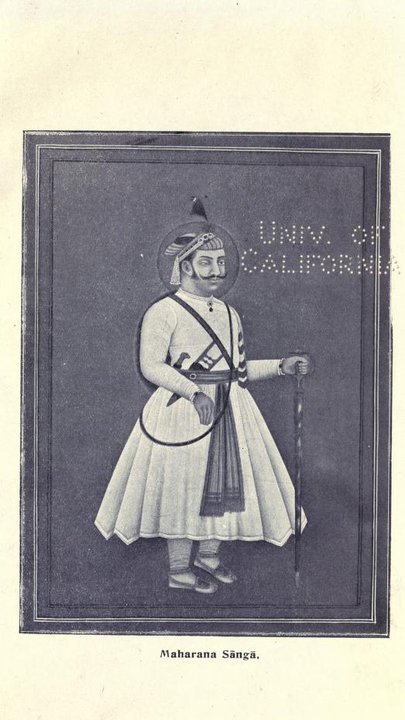 Maharana Sangram Singh (commonly known as Rana Sanga) (April 12, 1484 – March 17, 1527) was the ruler of Mewar state, a region lying within the present-day Indian state of Rajasthan, a desert region, between 1509 and 1527. He was a scion of the Sisodia clan of Suryavanshi Rajputs. He became king after slaying all his brothers and who stood up against the invaders and was able to unite many Rajput states to fight against the foreigners. He was a Rajput in a true sense, a valiant fighter and a king who is legendary for his chivalry and generosity. He lost the battle to Babur due to a traitor but his gallantry inspired many others.Rana Sanga succeeded his father Rana Raimal as the king of the Mewar in 1509[1]. He defended his kingdom bravely from repeated invasions from the Muslim rulers of Delhi, Gujarat and Malwa. He was the most powerful of the Hindu kings of that time. During his rule, Mewar touched the pinnacle of prosperity and as an exemplary king he protected and developed his empire.He was a man with indomitable spirit and despite losing one arm, one eye and numerous other grave injuries he carried on with great valor. His chivalry was reflected when he treated Sultan Mahmud of Mandu with generosity and restored his kingdom even when he was defeated and taken as a prisoner by Rana.Sanga had to face a new and powerful invader in the Moghul Babur, a descendant of Timur the Turk. In 1526 Babar invaded India and defeated Ibrahim Lodhi, Sultan of Delhi. In the face of this threat the Rajput clans united under Rana Sanga in a Rajput confederacy but the superior artillery of the Moghul prevailed against the cavalry charges of the Rajputs. At the battle of Khanwa, near Bharatpur in 1527, Babur defeated Sanga and the Rajput confederacy, and this victory established a new era in the history of India. Sanga sustained serious injuries in the battle and died shortly afterwards. He was succeeded by his son Ratan Singh. His tenacity and courage inspired many others including Rana Pratap.

I must read this.....sounds very interesting. :)