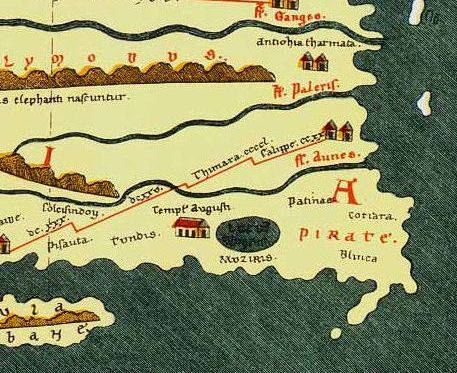 Digital Rare Book:
The Pandyan Kingdom
From the earliest times to the sixteenth century
By K. A. Nilakanta Sastri
Published by Luzac & Co., London - 1929

The Pandyan dynasty was an ancient Tamil dynasty of South India, one of the three Tamil dynasties, the other two being the Chola and the Chera.The kings of the three dynasties were referred to as the Three Crowned Kings of Tamilakam.

The Early Pandyans ruled parts of Southern India from at least 4th century BCE. Pandyan rule ended in the first half of the 16th century CE. They initially ruled their country Pandya Nadu from Korkai, a seaport on the southernmost tip of the Indian Peninsula, and in later times moved to Madurai. Pandyas had diplomatic relations as far as Rome.[citation needed] The country of the Pandyans was described as Pandyas by Megasthenes, Pandi Mandala in the Periplus of the Erythraean Sea and described as Pandyan Mediterranea and Modura Regia Pandionis by Ptolemy.

The Pandyan empire was home to temples including Meenakshi Temple in Madurai, and Nellaiappar Temple in Tirunelveli. Jainism, Shaivism, and Vaishnavism flourished during the reign of the early Pandya kings, but after the revival of the Pandya power by Kadungon, the Shaivite Nayanars and the Vaishnavite Alvars rose to prominence and the non-Hindu sects declined.[8] Strabo states that an Indian king called Pandion sent Augustus Caesar "presents and gifts of honour".

Traditionally, the legendary Sangams were held in Madurai under their patronage, and some of the Pandya Kings were poets themselves. The early Pandyan Dynasty of the Sangam Literature faded into obscurity upon the invasion of the Kalabhras. The dynasty revived under Kadungon in the early 6th century, pushed the Kalabhras out of the Tamil country and ruled from Madurai. They again went into decline with the rise of the Cholas in the 9th century and were in constant conflict with them. The Pandyas allied themselves with the Sinhalese and the Cheras in harassing the Chola empire until they found an opportunity for reviving their fortunes during the late 13th century. The Later Pandyas (1216â€“1345) entered their golden age under Maravarman Sundara Pandyan and Jatavarman Sundara Pandyan (c. 1251), who expanded the empire into Telugu country, conquered Kalinga (Orissa) and invaded and conquered Sri Lanka. They also had extensive trade links with the Southeast Asian maritime empires of Srivijaya and their successors. The Pandyas excelled in both trade and literature. They controlled the pearl fisheries along the South Indian coast between Sri Lanka and India which produced some of the finest pearls in the known ancient world.

During their history, the Pandyas were repeatedly in conflict with the Pallavas, Cholas, Hoysalas and finally the Muslim invaders from the Delhi Sultanate. The Islamic invasion led to the end of Pandyan supremacy in South India and in 1323, the Jaffna Kingdom of Sri Lanka declared its independence from the crumbling Pandyan Empire. The Pandyans lost their capital city Madurai to Madurai Sultanate in 1335. However, they shifted their capital to Tenkasi and continued to rule the Tirulnelveli, Tuticorin, Ramanad, Sivagangai regions. Meanwhile, Madurai sultanate was replaced by Nayaka governors of Vijayanagara in 1378. In 1529 Nayaka governors declared independence and established Madurai Nayak dynasty.

Pandyas are also mentioned by Greek Megasthenes where he writes about southern kingdom being ruled by women. Megasthenes knew of the Pandyan kingdom around 300 BCE. He described it in Indika as occupying the portion of India which lies southward and extends to the sea. According to his account, it had 365 villages, each of which was expected to meet the needs of the royal household for one day in the year. He described the Pandyan queen at the time, Pandaia as a daughter of Heracles.

...Nelcynda is distant from Muziris by river and sea about five hundred stadia, and is of another Kingdom, the Pandian. This place also is situated on a river, about one hundred and twenty stadia from the sea....
The Chinese historian Yu Huan in his 3rd-century text, the WeilÃ¼e, mentions the Panyue kingdom: ...The kingdom of Panyue is also called Hanyuewang. It is several thousand li to the southeast of Tianzhu (Northern India)...The inhabitants are small; they are the same height as the Chinese.... John E. Hill identified Panyue as Pandya kingdom. However, others have identified it with an ancient state located in modern Burma[39] or Assam.

The Roman emperor Julian received an embassy from a Pandya about 361. A Roman trading centre was located on the Pandyan coast at the mouth of the Vaigai river, southeast of Madurai.

Pandyas also had trade contacts with Ptolemaic Egypt and, through Egypt, with Rome by the 1st century, and with China by the 3rd century. The 1st-century Greek historian Nicolaus of Damascus met, at Antioch, the ambassador sent by a king from India "named Pandion or, according to others, Porus" to Caesar Augustus around 13 CE (Strabo XV.4 and 73).

The Chinese traveler Xuanzang mentions a kingdom further south from Kanchipuram, a kingdom named Malakutta, identified with Madurai described by his Buddhist friends at Kanchipuram.

In the later part of the 13th century Venetian traveller Marco Polo visited the Pandyan kingdom and left a vivid description of the land and its people. Polo exclaimed that:

"The darkest man is here the most highly esteemed and considered better than the others who are not so dark. Let me add that in very truth these people portray and depict their gods and their idols black and their devils white as snow. For they say that God and all the saints are black and the devils are all white. That is why they portray them as I have described."

Image:
Muziris in the Tabula Peutingeriana (the temple of Augustus is also visible in muziris).

"Pandyan rule ended in the first half of the 16th century CE."? What about the so-called "Later Pandyas"? The dynasty ruled in subordinated position till the half of the 17th century, with a consequent decline in the following century due to the advancing of the Nayakas of Madurai. The last known Pandya inscriptions are in the Kuttalanathaswami temple at Tirukkurralam issued during the reign of king Alaganperumal Sivala Varagunarama Kulasekhara Pandya. These two copper-plates are dated to Åš.1675, approximately the first half of 18th century (ca. 1735 CE).

Poompahar was once a flourishing ancient port city known as Kaveri poompattinam, where Marco Polo landed from Chinese Boat on way to Persia