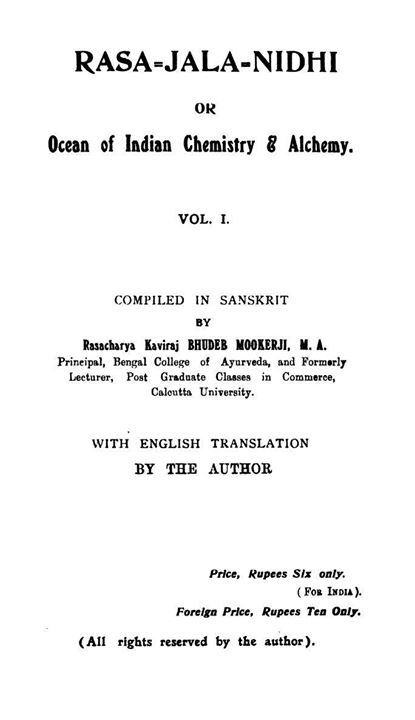 In Ayurvedic medicine, the traditional medical lore of Hinduism, Rasa Shastra is a process by which various metals, Minerals and other substances, including mercury, are purified and combined with herbs in an attempt to treat illnesses.Its methods correspond to the alchemy familiar in the Mediterranean and Western European worlds.Rasashastra is a pharmaceutical branch of Indian system of medicine which mainly deals with the metals, minerals, animal origin product, toxic herbs and their use in therapeutics.

The credit of developing Rasa Shastara as a stream of classical Ayurveda, especially in fulfilling its healthcare-related goals, goes to N?g?rjuna (5the Century CE).

The methods of rasa shastra are contained in a number of Ayurvedic texts, including the Charaka Samhita and Susruta Samhita. An important feature is the use of metals, including several that are considered to be toxic in evidence-based medicine. In addition to mercury, gold, silver, iron, copper, tin, lead, zinc and bell metal are used. In addition to these metals, salts and other substances such as coral, seashells, and feathers are also used.

The usual means used to administer these substances is by preparations called bhasma, Sanskrit for "ash". Calcination, which is described in the literature of the art as shodhana, "purification", is the process used to prepare these bhasma for administration. Sublimation and the preparation of a mercury sulfide are also in use in the preparation of its materia medica. A variety of methods are used to achieve this. One involves the heating of thin sheets of metal and then immersing them in oil (taila), extract (takra), cow urine (gomutra) and other substances. Others are calcined in crucibles heated with fires of cow dung (puttam). Ayurvedic practitioners believe that this process of purification removes undesirable qualities and enhances their therapeutic power.

Modern medicine finds that mercury is inherently toxic, and that its toxicity is not due to the presence of impurities. While mercury does have anti-microbial properties, and used to be widely used in Western medicine, its toxicity does not warrant the risk of using it as a health product in most circumstances. The Centers for Disease Control and Prevention have also reported a number of cases of lead poisoning associated with Ayurvedic medicine. Other incidents of heavy metal poisoning have been attributed to the use of rasa shastra compounds in the United States, and arsenic has also been found in some of the preparations, which have been marketed in the United States under trade names such as "AyurRelief", "GlucoRite", "Acnenil", "Energize", "Cold Aid", and "Lean Plus".

Ayurvedic practitioners claim that these reports of toxicity are due to failure to follow traditional practices in the mass production of these preparations for sale, but modern science finds that not only mercury, but also lead is inherently toxic. The government of India has ordered that Ayurvedic products must specify their metallic content directly on the labels of the product; however, M. S. Valiathan noted that "the absence of post-market surveillance and the paucity of test laboratory facilities [in India] make the quality control of Ayurvedic medicines exceedingly difficult at this time.

Verse work on mercury and its uses in the ayurvedic system in Indian medicine.