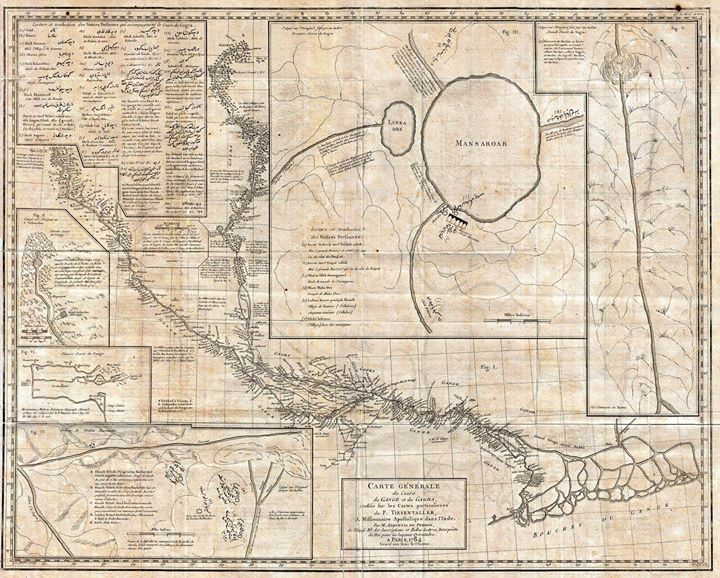 Joseph Tieffenthaler's visit to Ayodhya has been described in page 252 of this book.

Joseph Tiefenthaler (or Tieffenthaler or Tieffentaller) (27 August 1710 – 5 July 1785) was a Jesuit missionary and one of the earliest European geographers to write about India.

He lived and worked in India for 38 years (1743–1785) and wrote numerous works about India, visited Ayodhya in 1767. Johann Bernoulli translated his work Descriptio Indiae (in Latin) into French, published in 1788. According to this account, Aurangzeb (r. 1658–1707) had demolished the Ramkot fortress, including the house that was considered as the birthplace of Rama by Hindus. A mosque with three domes was constructed in its place. However, he also noted, "others say that it was constructed by 'Babor' [Babur]". The Hindus continued to offer prayers at a mud platform that marked the birthplace of Rama. Tiefenthaler was well-versed in Persian and Sanskrit, having written a Sanskrit–Persian dictionary, and other works in Persian. Evidently he did not find an inscription on the walls of the mosque stating that it was constructed under Babur's orders. He "emphatically attributed it to Aurangzeb, and Babur's name is carried by a few persons", states writer Kishore Kunal.

A rare and remarkable discovery this is Joseph Tiefenthaler and Anquetil-Duperron’s important 1784 map of the Ganges and Ghaghara (Karnali) river system. As a whole this map is a significant advancement over earlier mappings of this region as evidenced in the works of De L’Isle and others. Presented here are actually six maps on a single sheet. The central map (Fig. 1), showing the entire course of the Ganges and the Ghaghara rivers, is a European style map produced by Tiefenthaler based upon his own travels and quadrant surveys as well as on the indigenous cartography he collected along the way. Four of the five smaller maps presented are in fact Tiefenthaler’s copies of Indian maps given to or provided for him. The stylistic difference between these and the central European style map are clear, especially as regarding the rendering of direction, bodies of water, and topography. Tiefenthaler’s copies of indian cartographic material include figures II, III, IV, and V. Figure II correctly locates the source of the Ganges at the Gangotri Glacier, Gaumukah, known as the “Cow’s Mouth” due to its strong resemblance to the open mouth of a cow. Figure III, a large map at the top center, focuses on the Lake of Mansarovar (Mansaroar), the supposed source of the Karnali or Ghaghara River. It is unlikely that Tiefenthaler actually ever say Mansarovar as this lake is located high on the Tibetan Plateau which, during this historic period, was closed to foreigners. Figure IV is another Indian chart focusing on the secondary sources around the volcano of Doulou Bassandar. Figure V shows a secondary source for the Ghaghara as it runs through the Himalayas. Figure VI depicts earlier misconceptions regarding the source of the Ganges as suggested by P. Souciet in his 1729 four volume work Observations, Mathematical, Astronomical, Geographica, Chronological, and Physical . One of the most striking elements of this map is the inclusion of Pesian text in each of the maps Tiefenthaler claims to have copied from indigenous sources. These text blocks are vaguely transliterated and translated into French in a table in the upper left quadrant. The is the only European map of India we are aware of to incorporate Persian text. Most of the cartographic work that led to this map was completed by Tiefenthaler in India. Tiefenthaler, near the end of his life, forwarded it to his friend and fellow orientalist Anquetil-Duperron, living at the time in Paris. Duperron, a noted orientalist, compiled Tiefenthaler’s research and sketches into this important independently issued map. Though significant in its time this map is little known by modern cartographic historians who, when discussing the mapping of India, tend to focus on the later work of Rennell.

Click here for an enlarged map: http://bit.ly/2KFCJ1v Joseph Tieffenthaler’s remarkable map of the Courses of the Ganges and Ghaghara Rivers is a fascinating synergy between the mapping of Hindu and Buddhist pilgrimage sites and European Enlightenment cartography, prepared by Abraham-Hyacinthe Antequil du Perron. This fascinating map of the courses of the sacred Ganges River and the Ghaghara (Karnali) River represents a synergy of Indian and European sources and a bridge between Indian Pilgrimage mapping and European Enlightenment era cartography. The map is thus of great intellectual interest, as it represents the earliest accurate geographical depiction of a region and its great rivers which are sacred to Hindus, Jains and Buddhists, and which form the heart of the economic, political and cultural life of Northern India. The composition is dominated by the principal map which is based on the explorations of the Jesuit cartographer Joseph Tieffenthaler, who spent over 40 years wandering India, charting the countryside and making astronomical measurements with a quadrant. In particular, during the late 1760s he carefully mapped much of the length of the Ganges through the Gangetic Plain down to Calcutta. The five inset maps depicting various interpretations of the sources of the Ganges and the Ghaghara rivers, four of which are based on maps made by Indian cartographers under Tieffenthaler’s employ. Some of these sources, such as the ‘Gomukh’ (the ‘Cow’s Mouth’) at the foot of the Gangotri Glacier (Fig. II) and Lake Manasarovar, Tibet (Fig. III), are ancient pilgrimage sites and identifying their locations had long been a source of curiosity to Europeans. Interestingly, portions of the composition feature toponymy and annotations in both French and Persian (the language of the Mughal Court). The map was assembled and published by the esteemed French orientalist Abraham-Hyacinthe Antequil du Perron, based on the original manuscripts that Tieffenthaler had sent him from India. Source: Google Cultural Institute

The reason for the last comment on why modern Indian cartographers have thus far ignored this important map is that the source book for Indian cartography - Susan Gole's "India within the Ganges" ( Manohar Publications, Delhi ) - does not include it. The pre-internet era omissions of Indian cartography in Susan's research ( 1983) are mainly german/swiss/ Italian & other Non-English lesser known cartographers. Since 1983, no new list of Indian cartography has ever been attempted. Some obvious gaps emerged when Kalakriti Archives put up their Indian maps collection on display at the National Museum in Delhi, 2 years back. The exhibition catalogue kind of fills up for the gaps in Susan Gole's book. Apart from this "print" Tiefenthaler/Duperron map of the Ganga source, Kalakriti archive also has a 19 feet long "manuscript" map of the Ganga source. Its early 18th CE or earlier. That is a real beauty. Must see the detail in that one. Fortunately, its available online for all to see now. Dekho - https://artsandculture.google.com/exhibit/wwICYzB2dW2HLQ