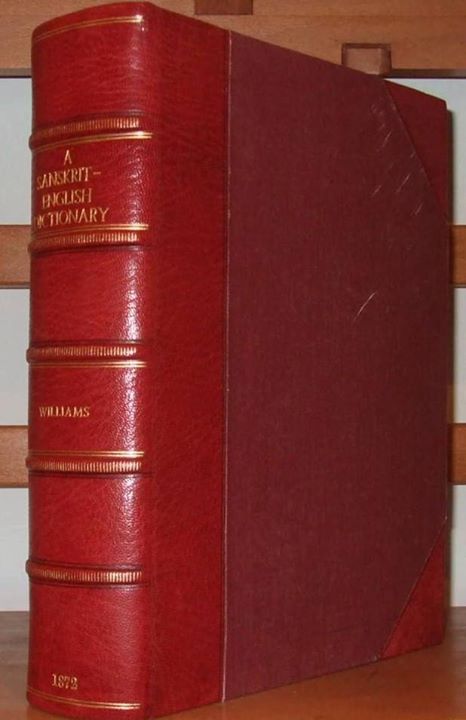 Monier Williams was born in Bombay, the son of Colonel Monier Williams, surveyor-general in the Bombay presidency. His surname was "Williams" until 1887 when he added his Christian name to his surname to create the hyphenated "Monier-Williams". In 1822 he was sent to England to be educated at private schools at Hove, Chelsea and Finchley. He was educated at King's College School, Balliol College, Oxford (1838–40), the East India Company College (1840–41) and University College, Oxford (1841–44).

Monier Williams taught Asian languages, at the East India Company College from 1844 until 1858, when company rule in India ended after the 1857 rebellion. He came to national prominence during the 1860 election campaign for the Boden Chair of Sanskrit at Oxford University, in which he stood against Max Müller.

The vacancy followed the death of Horace Hayman Wilson in 1860. Wilson had started the university's collection of Sanskrit manuscripts upon taking the chair in 1831, and had indicated his preference that Williams should be his successor. The campaign was notoriously acrimonious. Müller was known for his liberal religious views and his philosophical speculations based on his reading of Vedic literature. Monier Williams was seen as a less brilliant scholar, but had a detailed practical knowledge of India itself, and of actual religious practices in modern Hinduism. Müller, in contrast, had never visited India.

Both candidates had to emphasise their support for Christian evangelisation in India, since that was the basis on which the Professorship had been funded by its founder. Monier Williams' dedication to Christianisation was not doubted, unlike Müller's. Monier Williams also stated that his aims were practical rather than speculative. "Englishmen are too practical to study a language very philosophically", he wrote.

After his appointment to the professorship Williams declared from the outset that the conversion of India to the Christian religion should be one of the aims of orientalist scholarship. In his book Hinduism, published by SPCK in 1877, he predicted the demise of the Hindu religion and called for Christian evangelism to ward off the spread of Islam. According to Saurabh Dube this work is "widely credited to have introduced the term Hinduism into general English usage" while David N. Lorenzen cites the book along with Alexander Duff (1839). India, and India Missions: Including Sketches of the Gigantic System of Hinduism, Both in Theory and Practice : Also Notices of Some of the Principal Agencies Employed in Conducting the Process of Indian Evangelization, &c. &c. J. Johnstone. for popularising of the term.

In his writings on Hinduism Monier Williams argued that the Advaita Vedanta system best represented the Vedic ideal and was the "highest way to salvation" in Hinduism. He considered the more popular traditions of karma and bhakti to be of lesser spiritual value. However, he argued that Hinduism is a complex "huge polygon or irregular multilateral figure" that was unified by Sanskrit literature. He stated that "no description of Hinduism can be exhaustive which does not touch on almost every religious and philosophical idea that the world has ever known."

How ironic - Monier William tried to convert Hindus to Christianity, but his dictionary is primarily used today by Hindus to better understand their religion. Thank you Monier-Williams for bringing me closer to Hinduism!

wonder where I could get a copy of this..

Using a Sanskrit language to kill its roots vis-a-vis Vedic Religion is like using Gods names to decry Him - what we can call them சிஸுபால பிரவிருத்திகள்?

Have found this very useful while at work! http://spokensanskrit.de/

awesome - the online version is going to be handy - thx

Dear Fellow Bibliophiles! A copy of this rare, important and very handsomely bound book is available from a bookseller in the U.K. for ~Rup 22,285 Please find it here: http://bit.ly/2umDfuf