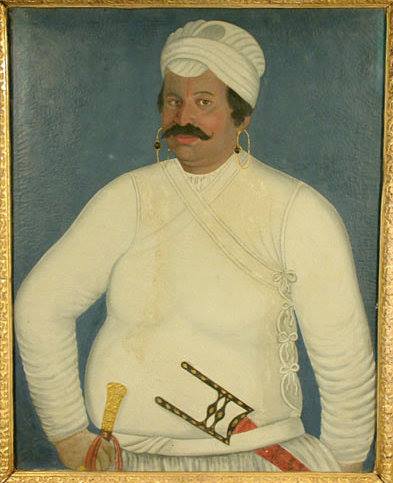 Digital Book :
The Private Diary of Ananda Ranga Pillai - VOLUME 1
Dubash to Joseph François Dupleix.
A record of matters political, historical, social, and personal, from 1736 to 1761
Translated from Tamil by the Order of The Government of Madras and Edited By Sir J. Frederick Price
Assisted by K. Rangachari - Superintendent of Records, Government Secretatriat, Fort St.George, Madras
Printed by Superintendent, The Government Press, Madras - 1914

The account given here of Ranga Pillai has mainly been derived from a copy of a petition in French, addressed to the Governor of Pondichery, which has been obtained from the family. Inthis the petitioner, after recounting the history of his uncle and his services, requested compensation for the losses which his relative had sustained in consequence of his devotion to the cause of the French. It bears no date, but from its contentst here seems but little doubt that it was written not long after the death of Ranga Pillai.

What induced him to keep a diary, there is nothing to show. It is very clear that it was never written with the slightest view to publication, or for perusal by others than, perhaps, the immediate members of his own family. It stands unique as a record of the inmost thoughts and reflections of an extremely able, level-headed Oriental, and of his criticisms — which at times are of the freest character—of his fellows, and masters. It is a strange mixture of things trivial and important ; of family matters and affairs of state ; of business transactions and social life of the day ; interspersed with scraps of gossip, all evidently recorded as they came to the mind of the diarist ; who might well be dubbed the ' Indian Pepys." Homely as is its diction, thereare in it descriptions of men and things which are vividly life-like, and passages which are startling; some in their pathos, and others in their shrewdness.That, for some reason or other, he attached much importance to the keeping of a diary is shown by an entry in his journal in which he records having sent to his younger brother, on the occasion of his first mission, on behalf of the Grovernment, to Madras, the materials for opening one, with strict injunctions to keep it regularly, and to note in it carefully everything that occurred. As a record, the diary, though perhaps in parts dull reading, is on the whole a deeply interesting, and probably valuable account of things historical, political, and social appertainingto the period embracing the rise, the zenith, and the beginning of the decline of the French power in India. Ranga Pillai evidently did not record, day by day,the events which he considered worthy of mention. Sometimes, consecutive entries are to be found ; then breaks of more or less length occur ; then the events of a single day appear ; and then entries are made under one date of the occurrences of several days—probably from notes. The diary is not written throughout in his own hand. The first volume of the original, which covers a period of about nine years from 1736—the year in which he started the chronicle—very largely is, but the other volumes, where originals are forthcoming, have, on examination,been found to be in several hands, with here and there the writing of Ranga Pillai himself. It seems pretty clear that as time went on, and his duties increased, he found himself unable to do the scriptory work which it involved, and employed amanuensis. There is no change of style or diction until the last few pages are reached. In these the record has evidently been made by some one else, as what was hitherto a diary becomes a narrative which terminates abruptly on the day on which Ranga Pillai died.

The diary was begun on the 6th September 1736, and was written in bound volumes of the size of large account books. After Ranga Pillai's death, hisnephew, Tiruvangada Pillai, continued to maintain a record, which runs to the beginning of 1770, and is still in the possession of his relatives. It was not until more than a century after the date on which it was begun, that the existence of Ranga Pillai's diary became known. In 1846, M. Gallois Montbrun, the father of the gentleman who until recently was Mayor of Pondichery—to whose courteous help in making search and inquiry regarding the diary I desire here to express my in debtedness—unearthed the manuscript, which, up to then, had lain unheeded in the house of the representatives of the family. M. Montbrun, who took the deepest interest in old vernacular writings, then proceeded to make a copy of it. But he apparently started with selections only; for the volume from which the translation for the Government of Madras was originally made is full of breaks. This was not observed until the actual work of editing was commenced. The omissions then noticed led to inquiry, and it was ascertained that M. Montbrun had subsequently supplied the blanks by a supplemental volume, which,however, was not forthcoming. Further search was made, and this resulted in the discovery of the undoubted originals of volumes I and II. The volume now being published is practically a fresh translation from these.

Kasi yatra - a travelogue/diary maintained by Yenugula Veeraswami ..a contemporary of CP Brown ..in Telugu ..gives an account of his travel to Kasi

Ananda Ranga Pillai apart from his business acumen had a penchant to record history for posterity through his well kept diaries. Every day when I go through such historical accounts I am reminded of Thomas Carlyle who said " No man lives in vain. The history of the world is the biography of great men who lived in it"

Ananda ranga pillai had a yarn dyeing unit in Pondicherry. It seems he made his fortune in Indigo trade. I remember seeing a tamil copy of his dairy at Bangalore Tamil Sangam.

Ananda Rangapoulé as he was known in Pondichéry, seems to have been the first Indian person to record a diary. His house, located opposite the southern gate of the Goubert market is still occupied by his descendants, and it can be visited on request. Just ring the bell. His diaries are a treasure trove for those who want to understand better the Tamil country during the Anglo-French wars.