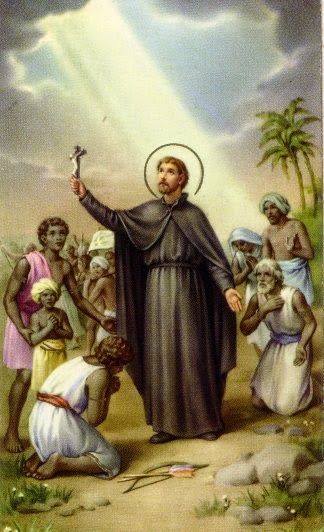 St. Xavier began his apostolic labors at Goa, which still preserved the memory of a celebrated prophecy, spoken by Peter of Covillan, of the Order of the Holy Trinity, in 1497, just before he was killed with arrows by the Indians. "In a few years," said this holy man, "there will arise, in the Church of God, a new religious Order which will bear the name of Jesus. One of the first priests of this holy Order will penetrate into the Indies, and convert to the true faith most of its inhabitants, by expounding to them the Word of the Lord." This memorable prophecy was fulfilled by the arrival of St. Xavier, and by the events which afterwards took place. A still more ancient prophecy of the arrival of St. Francis will be related on the 21 st of this month, in the life of the holy Apostle St. Thomas.

But to return to the apostolic labors of St. Xavier; he began, as well at Goa as at other places, by converting the youth. With a little bell in his hand, he went from street to street, and gathered the children, who ran after him in crowds. Leading them to the church, he explained to them the Christian doctrine, taught them prayers and songs, and told them to repeat at home what they had learned. Some of them he sent with his rosary to the sick, that the touch of it might, by the power of God, heal them. Some children proved little apostles and brought their own parents to the Saint that he might instruct and baptize them. Others brought him the idols of their parents or neighbors and broke them to pieces, or cast them into the fire, while others again sought the new-born children that they might not die without being baptized. When the young were sufficiently instructed, he turned his attention to the adults. To the Christians he spoke of penance and of leading a Christian life; to the infidels, of the truth of the Christian faith. He passed the whole day in giving instruction, nursing the sick, baptizing, hearing confessions, and other apostolic labors; his zeal was so great that more than once he forgot to eat or to drink, for the space of three or four days. He gave the greater part of the night to prayer.

As soon as he had converted the inhabitants of Goa, he went to Cape Comorin, and into the kingdom of Travancore. In the latter he baptized ten thousand persons with his own hand; and in the former he baptized so many, that on some days he was too much fatigued to raise his arm. Many of the idolatrous priests, called Brahmins, were convinced of their error and converted to the true faith, when they had seen four dead persons raised to life at the Saint's prayer. Many languages were spoken in these countries, all differing widely from one another; but Xavier, like the Apostles, had the gift of tongues from God. He sometimes spoke, in one language, to people of various tongues, and all understood him. At other times he preached to people in their own language, without having learned it. This rare gift, combined with the many miracles which he wrought wherever he went, made his name so celebrated in the Indies, that the inhabitants of several islands came to him and requested him to instruct them in Christianity.

The 'great' man who brought the Inquisition to India. Why is it helpful to have a re-run of colonial, racist propaganda books under this society ?

Propaganda of the oppressor?!

thats what i was going to say Jan!

// He sometimes spoke, in one language, to people of various tongues, and all understood him. At other times he preached to people in their own language, without having learned it. // He seems to have anticipated the technologies that Google, Microsoft and others are advancing daily. In his days such a gift was considered a "miracle" and now it is just another technology. The story about "four dead persons raised to life at the Saint's prayer" is interesting as well. Soon, we will have the technology to do that as well. :-) The description does remind me of Carl Sagan's "Demon haunted world."