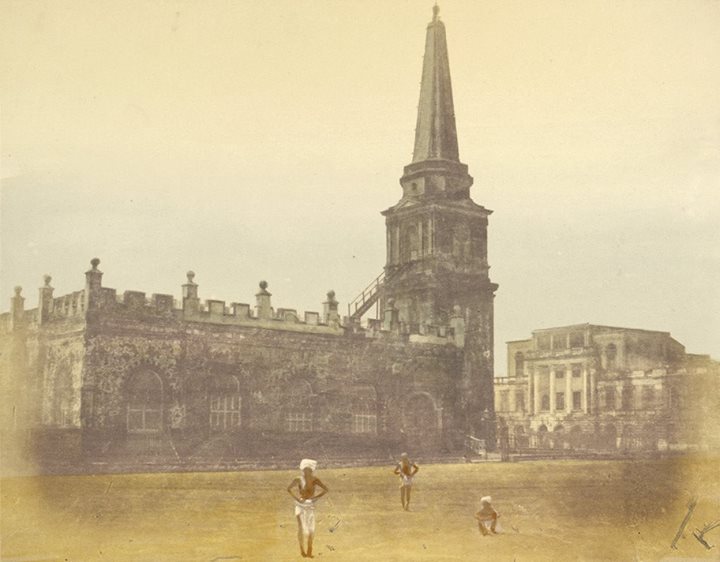 Photograph of St. Maryĺs Church in Fort St George, Madras, Tamil Nadu, taken by Frederick Fiebig in c.1851. St Maryĺs Church is the oldest surviving Anglican church in the East. Built by Sir Streynsham Master, Governor of Madras between 1678-81, it was consecrated in 1680. The architect was probably William Dixon, the Master Gunner of the Fort. The tower was completed in 1701, a steeple added in 1710, and the obelisk spire, designed by Colonel Gent, in 1795. It contains many graves and monuments of historical interest and is one of a number of historic buildings inside Fort St George. The fort was constructed in the early 1640 by the British East India Company as its headquarters of the Coromandel Coast and marked the foundation of Madras. This photograph is one of a series of hand-coloured salt print.Little seems to be known about Frederick Fiebig. He was probably born in Germany and became a lithographer (and possibly was also a piano teacher) in Calcutta, publishing a number of prints in the 1840s. In the late 1840s Fiebig turned to photography using the calotype process, producing prints that were often hand-coloured. His photographs includes several hundred views of Calcutta in the early 1850s, one of the earliest detailed studies of a city, a large hand coloured collection of which were bought by the East India Company in 1856, their first major acquisition of photographs. Among the roughly 500 pictures were views of Calcutta, Madras, Sri Lanka, Mauritius and Cape Town.

Text and image credit:
Copyright ę The British Library Board

Amazing! I'm from Chennai, and I don't recall seeing this church. Is it still around? If this church was built in 1678, then it would have already been around 180 years old by the time this photograph was taken in 1851!