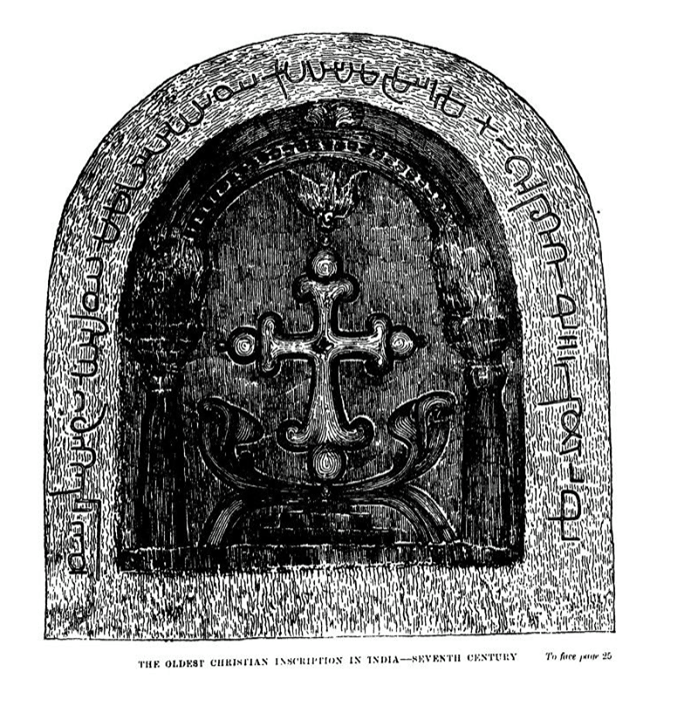 It's amazing that this inscription is from the seventh century - it looks Armenian to me. In the seventh century even Armenia wasn't a Christian country yet! Does this mean that Armenians were coming to India to practice their new found Christian faith? Amazing tolerance India - very proud!

It is believed that one of the three kings who went to Bethlem, at the nativity of our Lord, was king of Malabar. The heathens celebrate yearly a festival in honour of St. Thomas, for the preservation of their ships, because formerly, every year, many of them used to be lost while sailing to Parvi. St.Thomas, the Apostle visited Gondophares I in Taxasila in 40 Cir. Gondophares I, who also went by the Parthian name, Phraotes. Saint Thomas was brought before King Gundaphar (Gondophares) at his capital, Taxila

The ancient cross features in an important early 17th century manuscript by Athanius Kircher. This Kircher book happens to be the first " Print" book ever to print " Nagari / Sanskrit " script. Prior to the one page on "Sanskrit Alphabet" in this Kircher book ( Theater of the World) , Nagari/ Sanskrit had only appeared in manuscripts & carvings, never print.

All images of disciples, tombstones and Altar itslef above this cross are decorated and written in Armenian.

Most likely it's Syriac. The link between the Armenian Orthodox Church and the Syriac or Malankara Orthodox Church is very ancient, St Thomas is believed by us to have travelled to Kerala using the ancient trade route from the Middle East to Kerala. Jews used it then and there are still a few living in Kochi.

The ancient cross at Mylapore now