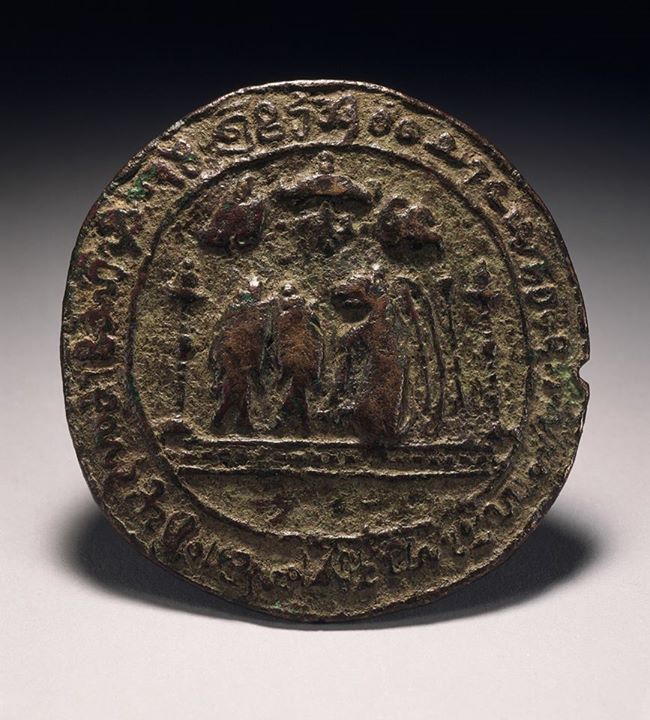 Digital Rare Book:
The Cholas
By K.A. Nilakanta Sastri
Published by The University of Madras - 1935

On the history of the Colas, as on many other subjects of early Indian history, we had, till about 1900, little information of an authentic character. When, in the early years of the last century, Col. Mackenzie made his great effort to survey all and collect as many as possible of the antiquarian remains of the Madras Presidency, his agents in the Tanjore district failed to discover anything more remarkable on the ancient Colas than the Colavamsacaritram. This is a late Sthalapurana which is legendary and full of miracles. Tradition knew nothing of the real history of the older rulers of the land and could not tell if the Cola dynasty numbered eighty-four kings or sixteen.

Epigraphy has made remarkable progress in South India during the last fifty years. Hultzsch, Venkayya and Krishna Sastri have brought out scholarly editions of many of the inscriptions. Of the Sangam literature, which is doubtless the earliest group of Tamil writings extant, considerable portions have been recovered and published. Now it is both possible and necessary to attempt a comprehensive study which shall bring together the results so far attained, and so to approach a definitive history of the Colas.

To attempt a task of this nature in a subject which, thanks to fresh discoveries or new interpretations of old material, is apt to have its foundationsdisturbed from time to time, we are warned, to run the risk of our structure collapsing no sooner than it is reared. But this is, in regard to Cola history, greatly to under-estimate the permanence of the results reached so far; for a careful review of the steps by which the reconstruction of this history has proceeded since the days when the clues obtained from Eastern Calukya copper-plates were correlated to the evidence from the Cola inscriptions of Tanjore and other places in the Tamil country, must convince the most sceptical among scholars that a considerable tract of ascertained knowledge has been added permanently to the history of South India. Even the discovery, in recent years of the important Karandai (Tanjore) plates of Rajendra I and the Charala plates of Virarajendra I has not made any great difference to the general outline of the political history of the Colas. A settled and continuous narration of the political history of the Colas appears therefore not merely quite possible to undertake, but likely to be of more than transient interest. The case for such an undertaking becomes stronger if it is observed that, in its administrative system and in its literary and artistic achievement, Tamil civilisation may be said to have attained its high water mark under the Cola empire of the tenth to the thirteenth centuries. Under this empire also flourished in their greatest strength the sea-faring instincts of the people of Southern India which enabled them to add for a time an overseas empire to the more abiding prospects of a profitable trade with the states of the Far-East. The telling of a story which fills so large a place in the past life of the land and is so full of colour and incident should not be unduly postponed. At the same time we should recognise that, in regard to certain points of the story, the preliminary researches, of which one should have desired to avail oneself, have yet to be made; and even the attempt to paint the picture as a whole may be the means, by drawing attention to their need, of bringing such researches into being.

The history of the Colas falls naturally into four divisions: the age of the literature of the Sangam, the Divisions of the interval between the close of the Sangam age and the rise of the Vijayalaya line, the Vijayalaya line which came to prominence in the ninth century a.d. and lastly, the Calukya-Cola lineof Kulottunga I and his successors from the third quarter of the eleventh century to about the middle of the thirteenth. Nearly two centuries before the rise of Vijayalaya in the neighbourhood of Tanjore. there flourished a Cola kingdom in the Telugu districts comprising portions of Cuddapah, Kurnool and Anantapur, whose kings traced their descent from Karikala. Nothing definite is known, however, of their connection with the early Colas. Again, from about the twelfth century, there were a number of local dynasties which claimed also to be among the descendants of Karikala and to belong to the Kasyapa gotra. Besides their legendary pedigree there seems to be no evidence connecting them in any manner with the Colas of the Tamil country. Of these late Telugu-Colas, who have left behind a large number of stone and copper-plate inscriptions, we need make only passing mention in this history.

Sir, There seems to be a typo error . It needs to be corrected. Chola is typed as Cola. Kindly it may be edited.

No Typo Error. It should be COLA with a stroke on C

Hello friends, I would like to make a rejoinder. Most probably Ćolas are Bharadwajah Gothra. According to our Babgshabali, we were from somewhere near present Andhra Pradesh-Madrasapattanam region- during expeditions to Kalinga, Banga, Sunga and Anga many people settled in these regions. Even some people went to Nepal, mostly Kathmandu valley. Those who migrated to North West regions as Maharashtra, Rajasthan, Gujarat and Sindh usually have the same Gothra Bharadwajah ! Disambiguation considered. Ćola becomes 'Sola-Angh-Ki' > Solanki (Maharashtra, Rajasthan and Gujarat) > Solangi in Pakistan's Sindh and Punjab ! Same in Odhisa (both Kalinga and Utkal regions) people of my clan known as Bhadra (same in Bengal, Rahr, Kamrupa, Burma and Thailand (It is again disambiguation as Watra like Sheela-Bhadra as Shinawatra ! Did you hear Takhshasheela_Bhadra; the former PM of Thailand (Shyam Desh) as Mr Thakshin Sinawatra !?? Lastly, three Sultanate of Malaysia family belongs to Ćola lineage, I had corroborated one- Sultan of Johor. In Kathmandu, a rare Brahma-Kshatriya clan usually found having same surname as 'Bhadra' ! Very rare but not scanty in Newars ! But, they usually says, they are from Kerela and something near to Nairs- but their Gothras made me doubtful about Nair lineage,but Ćolas in context to Bengal, Bihar and Assam proximity. Hopefully, you guys understand my 23 years long private studies on my own clan. Regards.

The correct word is Chozha - to be precise !