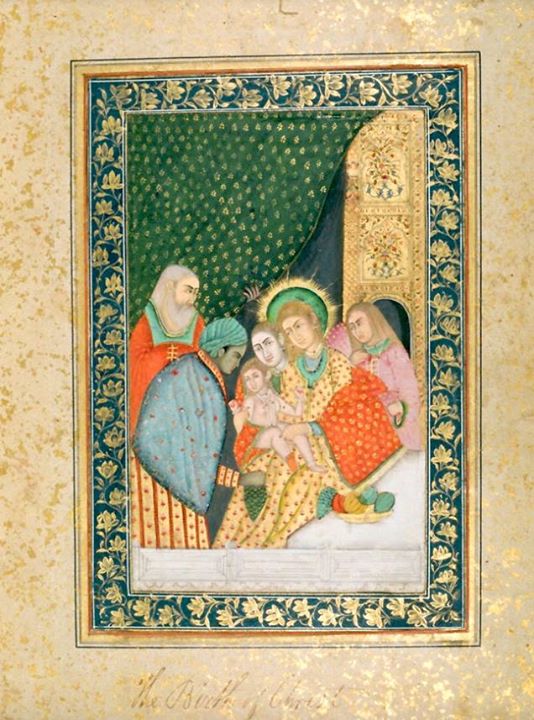 A masterpiece on a widely different theme foreign to Indian painters, the miniature represents mother Mary with child Jesus in her lap and a number of persons around. They include a bearded tall male in long saffron gown with green neck and button-loops characteristic to the costumes of the persons in medieval Christian hierarchy, and an alike clad and long haired female: perhaps the persons from ecclesiastic order representing the celestial beings believed to emerge with gifts when the Holy child was born, a maiden with dark face wearing a heavy green turban on head and a thick green sheet on her back examining the child : perhaps one from the nursing line, and yet another woman with hardly any specificity behind mother Mary, obviously representing the common devotee.

Whatever the account of his birth or circumstances of mother Mary's life in scriptures, the miniature represents the child Christ and mother Mary in full regalia with golden halo around mother Mary's face, a pavilion embedded with precious stones, only a part being visible, and splendid tapestry, in the background, rich silk quilt wrapping the child Jesus, mother Mary's ensemble and the entire paraphernalia around, everything as sustains in popular tradition. The painting has been rendered primarily in late Mughal style as practised under the Mughal emperor Muhammad Shah, that is, after about hundred years of the Mughal painting's golden era, it is not, however, without European influence reaching Mughal court with Christian travelers from England.

These European travelers not only brought with them elements of European art but also actual art-pieces dominated by Christian themes, mother Mary and child Jesus in special. This amalgamation of two sets of elements had begun during the period of Mughal emperor Jahangir when the British ambassador Sir Thomas Roe had brought as a gift to the Emperor a painting of Madonna. Indian painters not only blended these elements into their style but sometimes even copied a Christian theme on their canvas often creating a delightful blend of two. The painting reveals striking unity of composition and naive simplicity of theme.