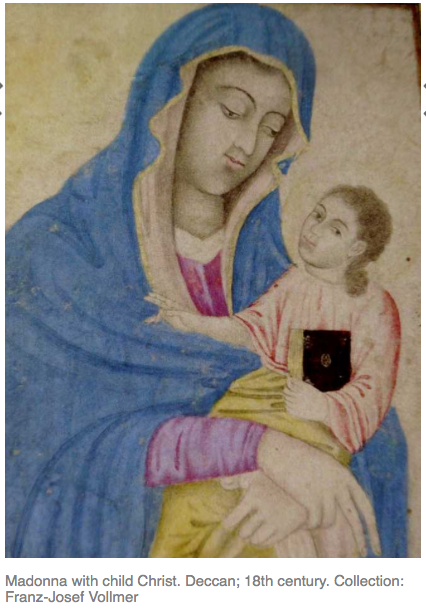 Pictures of Christian themes were favourites as gifts to be brought by embassies to the emperor and the imperial elite.

We see them everywhere in books on Mughal painting: painters bending over their task, copying paintings with Christian themes; images of the Virgin peering down from the ceiling of a palace at the emperor Jahangir holding court; works with Imperial seals on the back, showing angels and Christian saints and Biblical allegories. But not often has one seen a whole exhibition devoted to the theme of Christian art in India. When, therefore, Dr. Franz-Josef Vollmer, a dear friend, recently mounted a show on this subject at the Museum Rietberg in Zurich, consisting of works drawn from his own collection and selected works from the museum’s holdings, there was interest and excitement. For there was much to see, and much to absorb. Some splendid images apart, one could, in a precise, crisp manner, read about the background in which Christian art came to India, the political situation of those times — religious pulls and pressures, trading considerations, social exchanges, all included —, the themes that turned out to be the most popular or the most visible, the manner in which Indian painters working for the Mughal court responded to the new ways of doing things that were reflected in Christian images. A rounded picture was on offer.

One knows that, within the broad framework of the coming of European art to India, Christian art always occupies a special niche, and nearly all of it takes one in the direction of the great Mughals. “There was a strain of artistic feeling”, wrote Sir Edward Maclagan in his classic 1932 work on The Jesuits and the Great Mogul, “which ran through successive generations of the ruling Mogul house in India”. Of its expression in certain departments of art, “especially those in which their patronage and taste was affected by contact with specimens of Western art”, he added, “much is known”. But of special interest to him, and now to us, was the manner in which the Jesuit missions brought Christian art into India, not for their own edification alone but as an instrument of their mission: introducing the Faith in graphic terms to a vast and populous newland, and to convert as many as possible, including possibly the emperor, Akbar, himself.As many as three different Jesuit missions came to India in the Akbar period alone — others were to follow — even though the last mentioned hope was never realised, causing, as Father Felix Raj wrote recently, much dejection in Spanish and Portuguese hearts. But the accounts left by members of the First Jesuit Mission to the Mughal court, especially the one by Father Antony Monserrate, are invaluable to gaining an understanding of the situation. These records are rich, and even though there is animated discussion about whether these are completely free of bias or exaggeration, one gets the feeling of these helping one to peer at those times, and feel their texture.

This mission came to Akbar’s court in response to a letter that the Emperor wrote himself to the Christian authorities at Goa, asking for two learned priests to be sent to him. “… I am sending Abdullah, my ambassador”, the letter said, “and Dominic Perez, the interpreter, with the request that you will send me two learned Fathers and the books of Law, especially the Gospel, that I may know the Law and its excellence….” This caused natural excitement in Jesuit quarters, for the emperor’s liberal and inquiring nature was known and the missionaries saw a window opening up. Father Rudolf Aquaviva was chosen to lead the mission, with Father Monserrate and Brother Francis Henriques as its two other members. The year was 1580.