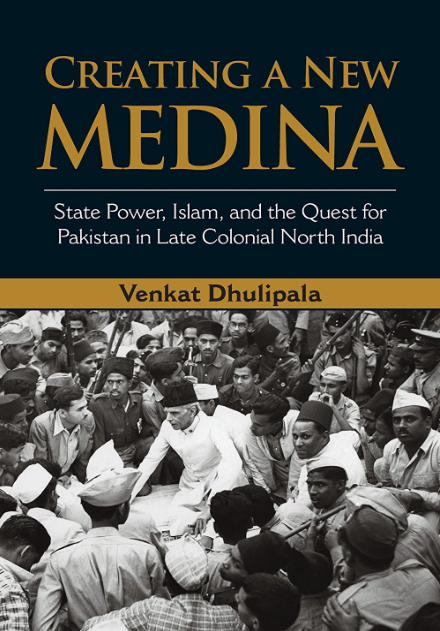 This book examines how the idea of Pakistan was articulated and debated in the public sphere and how popular enthusiasm was generated for its successful achievement, especially in the crucial province of UP (now Uttar Pradesh) in the last decade of British colonial rule in India. It argues that Pakistan was not a simply a vague idea that serendipitously emerged as a nation-state, but was popularly imagined as a sovereign Islamic State, a new Medina, as some called it. In this regard, it was envisaged as the harbinger of Islam's renewal and rise in the twentieth century, the new leader and protector of the global community of Muslims, and a worthy successor to the defunct Turkish Caliphate. The book also specifically foregrounds the critical role played by Deobandi ulama in articulating this imagined national community with an awareness of Pakistan's global historical significance.

The Venkat Dhulipala interview: 'On the Partition issue, Jinnah and Ambedkar were on the same page'.

Venkat Dhulipala’s book – Creating A New Medina: State Power, Islam, and the Quest for Pakistan in Late Colonial North India – demolishes the existing scholarship on Muhammad Ali Jinnah that his demand for Pakistan was a mere bargaining chip, that it was the reason why he deliberately kept the idea of Pakistan vague, and that Pakistan was merely an obsession of the Muslim political elite.

Excerpts from the interview:

Whoever want to know real causes behind genesis of terrorist state

Yes, at the time of partition, common Muslims had nothing to do with Pakistan, only elite Muslim echelons from UP keeping Jinnah on forefront advanced the theory of Pakistan, a progressive and modern country, which could lead the entire Muslim world in new dawn to come. This theory failed because except a few Muslim elites most Muslims who voted for creation of Pakistan stayed back in India, whereas people in states having majority Muslims, who later turned into Pakistan had nothing to do with creation of Pakistan. These elite migrants from UP become the ICS ruling class joined hands with Punjabi dominating ruling class and army and started ruling innocent Balloch, Pakhtoons, phathans, Sindhis, and poor Mohajirs with might and strong had. This resulted in unequal society and turned Pakistan into terrorists state.

nice, a serious book by a historian for a change

On Partition issue Ambedkar and Jinna were in same boat because both were british stooge.

Somebody please gift me this

I so want to read this

Is it available on Amazon

Yume Nosaka this is the one I lurked through

a good reading, though much discussed.