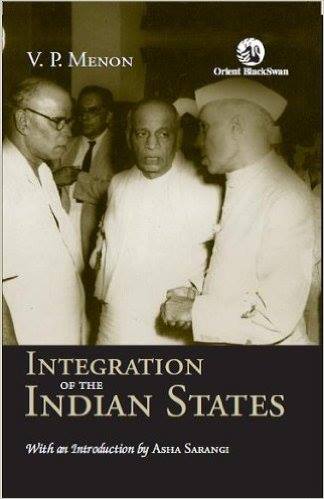 Digital Rare Book:
The Story of the Integration of The Indian States
By V.P.Menon
Published by Orient Longman Ltd, Madras - 1956

"The transfer of power or the attainment of Independence was to be followed by yet another major undertaking - the integration of the many Princely states (as the British called them but many of which were ancient kingdoms in their own right). V. P. Menon, Secretary States Department - the senior civil servant charged with this mission - describes how he went about it...the politics, the bluff, the persuasion, the tact and even the coercion employed are described ... in fact, the merit of some of the books uploaded on the subject ... Campbell Johnson's on the Mountbatten period, the Journals of Wavell and the works of V P Menon ... is that they are written as contemporary accounts ... without the sanitising and Bowdlerizing effects of expedient "revisionism" .... these books thus have a vibrancy and immediacy - involving real people in real time - that formal "historical" accounts do not supply ..."

Vappala Pangunni Menon or as his friends would call V P Menon was the Constitutional Adviser and political reforms commissioner to the last three Viceroys during British rule in India. Menon was the only Indian in Mountbatten’s inner team.

Menon was the man who planned for the partition of India into two dominions, which was eventually adopted. It was Menon who realised the need to get the Princely States to accede to India before the date of independence and that Mountbatten was the ideal person to facilitate this. When the communal violence broke out in India following its independence, Menon had asked Mountbatten to take charge.

V P Menon has never received due recognition he deserved for his contributions and his tireless efforts to keep the country united. The rivalry between the Indian National Congress and Muslim League led to the collapse of the interim government. At that time Menon forwarded Muslim League’s idea of partitioning India into two independent nations — India and Pakistan. He proposed this idea to Mountbatten, Jawaharlal Nehru and Sardar Vallabhbhai Patel and other the Indian leaders.

Later, After the independence of India, Menon became the secretary of the Ministry of the States, headed by Sardar Vallabhbhai Patel, with whom he had developed a bond of trust. Menon worked closely with Patel over the integration of over 565 princely states into the union of India, managing the diplomacy between the States Ministry and the various Indian princes, acting as Patel’s envoy and striking deals with reluctant princes and rulers. Patel respected Menon’s ingenuity in diplomacy, and often did not question if Menon exceeded any instruction Menon also worked with Patel over the military action against the hostile states of Junagadh and Hyderabad, as well as advising Nehru and Patel on relations with Pakistan and the Kashmir conflict. Another significant achievement of Menon was to control the communal riots which followed immediately after the partition.

a good book, but very much from the "Menon/Mountbatten perspective" -- a shame there has been nothing better, but it would take a serious professional to do the work