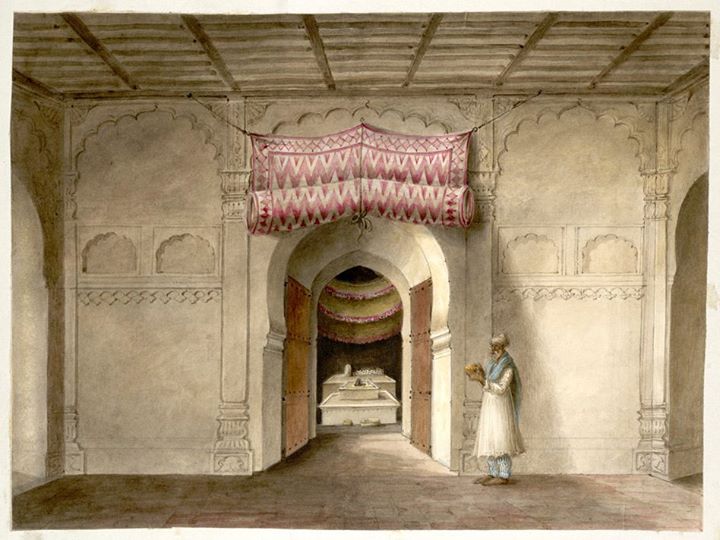 Watercolour of Qadum Rasul mosque at Gaur from 'Views by Seeta Ram from Malda to Gunga Pursaad Vol. II' produced for Lord Moira, afterwards the Marquess of Hastings, by Sita Ram between 1817-21. Marquess of Hastings, the Governor-General of Bengal and the Commander-in-Chief (r.1813-23), was accompanied by artist Sita Ram (flourished c.1810-22) to illustrate his expedition to Bengal in 1817 and his convalescent tour in the Rajmahal Hills in the winter of 1820-21.

Idealised view of the interior of the Qadam Rasul mosque enshrining the Prophet's footprint at Gaur. The ruined city of Gaur is located on the India-Bangladesh border in the Malda district of Bengal. The Qadam Rasul, a single-domed square edifice, was built by Sultan Nusrat Shah in 1530 to enshrine a stone reproduction of an impression of the Prophet's foot. It has a verandah forming a barrel-vaulted corridor on three sides which is elaborately decorated on the eastern side. Arched entrances pierce the north, south and east sides. Inscribed below: 'Kuddum Russool in the Interior of the Musgid.'

Does the mosque still exist?