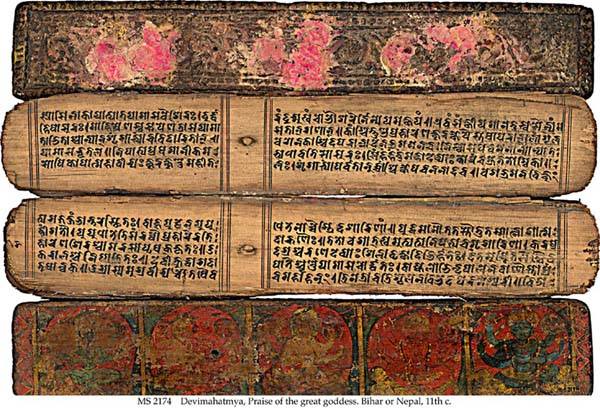 Article:
The Audacity of Sanskrit
By Shashikant Joshi
Swarajya

Why we need to study the mother of all languages.

Language carries its culture with it. English books will have Shakespeare, Wordsworth and others whom I have not read. I am yet to finish many great Indian authors. Chinese books will have works of their own thinkers. But sadly, even in Hindi, translated Russian stories are included in the CBSE Class X syllabus. Where did Premchand go? When I was learning Sanskrit in my schooldays, we had excerpts from Upanishad, though simpler ones like ‘satyam vada | dharmam chara | bhootyai na pramaditavyam’ etc.

That exposed the mind to some world class thoughts delivered at the earliest existing recordings of human kind, which even if doesn’t make sense in your schooldays, would be available for contemplation at a later stage of life. Today’s CBSE Sanskrit textbooks have ‘This is a television. It shows pictures from far away.’ While it is great to show that Sanskrit can be used to communicate modern ideas, the richness of its original ideas should not be sidelined.

Learn other languages while learning ours as well.

When a German learns English or French, or a Chinese learns Korean, do they do it by ignoring or ridiculing their own language? Have you seen a headline like, ‘Germany dumps Latin in favor of Malayalam’ ‘Chinese favour Spanish over Mandarin’? No one neglects their own stuff to learn something new. You master your own language, then go ahead and master others. Experts say that learning should first happen only in the mother tongue, so that the child develops mastery over one language.

Forget about Sanskrit, modern students and parents alike are neglecting their own mother tongues. Bollywood stars who earn crores from Hindi cinema read dialogues written in Roman script. What shame and what disrespect to one’s own profession! One can’t even learn the script of the language that makes them stars? Ads abound in Roman script using Hindi. Learning of foreign languages should not be at the stake of Indian languages. We already learn one foreign language mandatorily—English.

Will learning a language make the difference? Did Germany make progress by learning Swahili or China by learning Finnish? If you want to succeed like Germany or China, then adopt their work ethics, their systems of justice, governance, transparency or whatever suits your situation. When someone says “Learn Sanskrit for its wisdom”, a counterargument is “Even if we suppose that there is some useful wisdom in Sanskrit, why not translate it all in all the modern languages and be done with it. Why learn Sanskrit?”

So even if there is some great scientific content in German or Chinese, I am sure it is all available in English at least for the entire college-level curriculum for mere mortals. Post-doc? You are on your own! So there is no need to learn foreign languages just for its content. Then, the only reason remaining is to connect culturally, socially and economically to the people. Then why not learn our own languages with the same sincerity and passion, before we embark on other languages? Connect to our own culture, before connecting to others’?

Is Sanskrit less of a language linguistically? There is enough material out there for anyone who cares and is able to read, about the undisputed superior nature of the way Sanskrit grammar, and hence the language, developed. There is nothing over-patriotic about this claim. International linguists agree on this. The entire field of modern linguistics owes its origin to the study of Indology in the last few centuries. The only Spelling Bee contest in Indian languages, thanks to Sanskrit’s genes, is Can you hear properly?, since there is no guess work from sound to letter.

The concept of forming conjugates, samyukta akshara is due to a deep linguistic principle that one sound should have one letter/character. In the last few years, the government of India has decimated Devanagri script in its attempts to simplify it. Instead of lifting the students’ standard, they chose to lower the standard of the language.

While i have every sympathy with learning Sanskrit and retaining local languages, this line caught my eye "Germany dumps Latin in favor of Malayalam" So, just to clarify: German is not based on Latin, that is French, Italian, Spanish. English is of Germanic stock with an overlay of French. Few learn Latin, as I was forced to do, or Greek, the other classical language. British schools teach French, German, Spanish, even Mandarin.