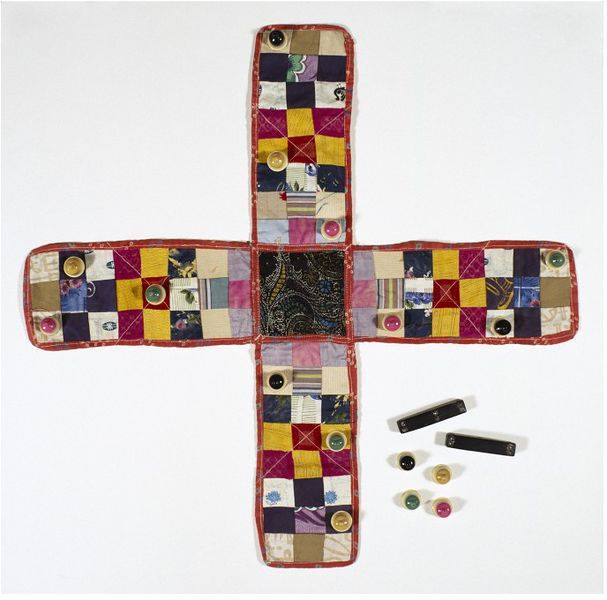 Pachisi game board of wood, straw and cotton made in India in the 1970s

Pachisi is considered as a national game of India and it was introduced into England towards the end of the 19th century, hence Jaques patent of 1887. Pachisi is usually played on a cross shaped panel of cloth created from a patchwork of different coloured and printed cottons. Expensive sets may have rock crystal markers, but often the markers are made of wood.

Rules:
The game is often played with two large oblong dice, but equally six cowrie shells could be used, the number of moves being determined by the number of shells showing their openings uppermost.

The aim is for a player to move all four of his or her markers around the board from start to finish. Markers may be captured and returned to the start, but 12 safe resting places, indicated by white stitching or other marks across the squares, are provided where this cannot happen.

This was originally known as "CHAUSAR" - as it had four sides & was later renamed to "CHAUPAR" or "CHAUPAD" - may different spellings & this Patchesi was the Anglicised version of the original game played for over 1000 plus years before the inventor of Patchesi copied it 7 maybe make LUDO ... http://en.wikipedia.org/wiki/Shakuni

We still play this game in Rajasthan.

and play when we all r togather..

Shouldn't an Indian have patented the game?