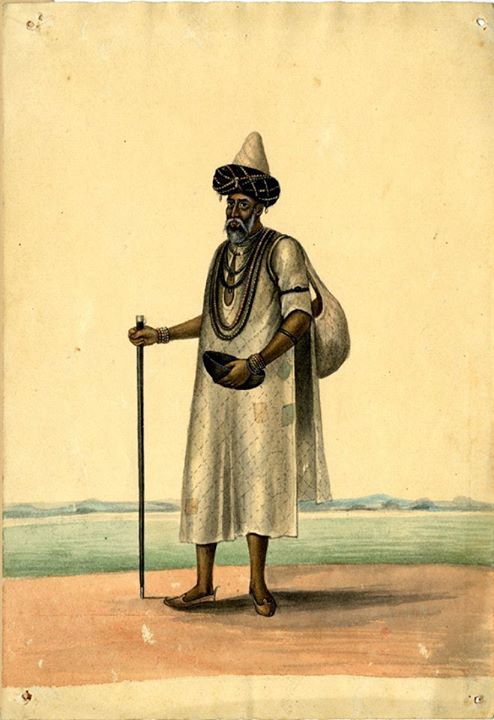 Watercolour painting on paper of a mendicant, possibly a Muslim dervish. The man is standing upright and holds a walking stick in his right hand. In his left hand he holds a large begging bowl. He wears a patchwork tunic which appears to have been repaired and a matching bag over his left shoulder. He wears numerous strings of beads around his neck and arms and has shoes with up-turned toes on his feet. He has a full beard and moustache and a conical hat on his head with a decorated border studded with jewels. He is shown standing on a path, with trees and hills in the far distance. His shadow is represented by a black shape attached to his feet on the ground.

It is a great shame that demon-crazy democracy is eradicating these people from our view.

Fabulous watercolour...just look at the colours used, the vividness of the painting , the use of lighting/shading and sharpness of lines !

The begging bowl is fashioned from a nut found in Mauritius or Sychelles...

I think, He was a Sufi Seekers." The sufi acts according to whatever is most fitting to the movement" .