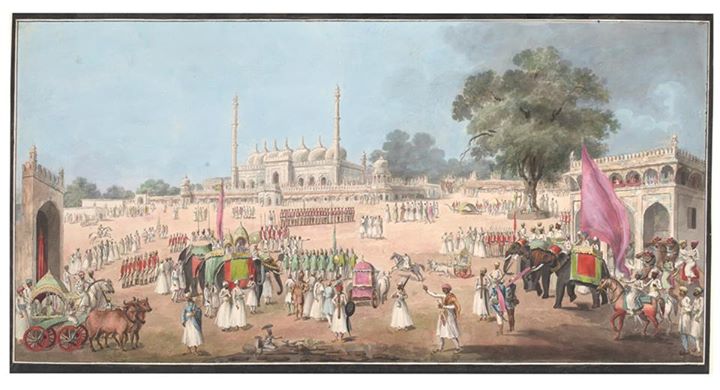 Nawab of Murshidabad proceeding to the mosque for the festival of Bakr Id, Murshidabad, ca. 1795 - ca. 1805

Marks and inscriptions:
'Munny Begum's Musjid with the procession of the Bukery Ed at Moorshidabad'.

This is one of a group of nine paintings. They depict a durbar (public reception) at the Murshidabad court, and various Hindu and Muslim festivals and religious scenes. A Murshidabad artist copied it, probably from an original oil painting by George Farington. He had worked in Murshidabad from May 1785 until his death there in 1788. Farington's original is lost. Bakr Id, which is depicted here, is a Muslim feast of sacrifice. Muslims celebrate it on the tenth day of the Zilhijj (April / May) in commemoration of Abraham's willingness to sacrifice his only son Ishmael. At the moment of sacrifice, however, God substituted a ram for the youth.