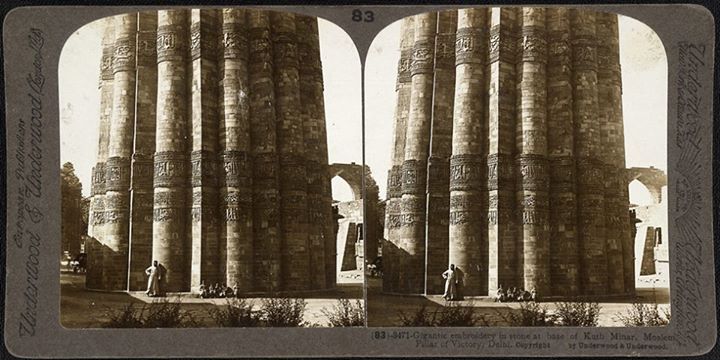 Gigantic embroidery in stone at base of Kutb Minar, Delhi - 1903

Stereoscopic photograph of the base of the Qutb Minar at Delhi, taken by James Ricalton in c. 1903, from The Underwood Travel Library: Stereoscopic Views of India. The Qutb Minar is a tower of victory, part of a complex containing some of the earliest structures of Muslim rule in India. It was begun by Qutb-ud-Din Aibak (r.1206-1210), the first Sultan of Delhi and founder of the Slave Dynasty, and continued by Shams-ud-Din Iltutmish (r.1211-1236). This tower accompanies the Quwwat-ul-Islam mosque and was probably inspired by the style of Afghan minarets. It is 72.3m (238 ft) high, and rises in five tapering fluted storeys interrupted by projecting balconies. The chief material used is red sandstone. The two highest storeys are mainly marble, they were rebuilt by Firuz Shah Tughluq (r.1351-1388) in 1368 when a cupola was added, later damaged in an earthquake and removed. The four balconies are interspersed with broad carved bands of interwoven calligraphy and floral motifs; three bands on the first storey and two on the second and third storeys. This is a detailed view of the base of the minar showing some of the inscription bands. This is one of a series of 100 photographs designed to be viewed through a special binocular viewer, producing a 3D effect, which were sold together with a book of descriptions and a map. Stereoscopic cameras, those with two lenses and the ability to take two photographs at the same time, were introduced in the mid 19th century and revolutionised photography. They cut down exposure time and thus allowed for some movement in the image without blurring as subjects were not required to sit for long periods to produce sharp results.

Try crossing your eyes like when viewing a stereogram; you can actually see a bit of 3D. I think it should be possible to use some equipment to make a full 3D view out of this - either using the technology in 3D movies (polarised images) or something like a Viewmaster...

Well Emperor Ashok made first 'Victory Tower' in Bodhgaya after a victory on Hun....That tower was tallest than Qutb Minar....But muslim invaders demolished it....

this ia a stereo photograph and can be viewed by a hand held photo viewer . i have a few of these and lot of photos too. incredible to see them when they become 3d.

Most Muslim shrines in the Indian Subcontinent stand over Hindu or Buddhist shrines underneath them. In case of Qutub Minar its the same story as it was a temple complex & Muslim invaders demolished it to make way for Qutub Minar. The " Arahi Din Ka Jhopda" story is well known. This is also seen in Devgiri ie Daulatabad & Sarnath where parts of Dhamekh Stupa were used to make a Islamic tower. The Muslim period like The British Imperial Rule is the darkest chapter of Indian History!

Making a glorious monument like the Qutb Minar is a dark chapter in history ???

Soham Pablo Banerjee, depends on how that "glorious" monument is made!