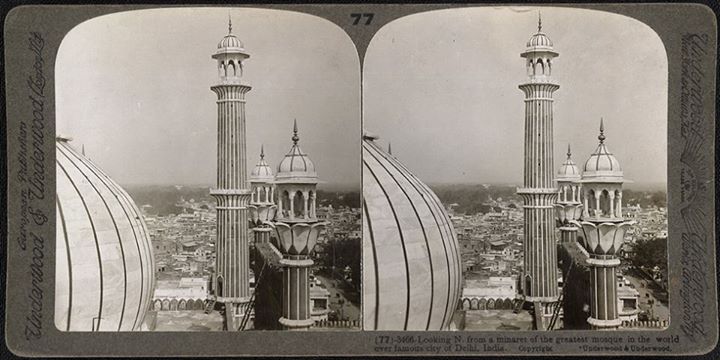 Looking north from a minaret of the Jumma Masjid, Delhi - 1903

Stereoscopic photograph of the city of Delhi, taken by James Ricalton in c. 1903, from The Underwood Travel Library: Stereoscopic Views of India. This is a view from a minaret of the Jami Masjid looking north over the outskirts of Delhi, in the distance to the right is the Red fort. The Jami Masjid was the principal mosque of Shah Jahan's new capital city Shahjahanabad. The largest mosque in India, it was the last great architectural venture of Emperor Shah Jahan (r.1628-58), the most prolific builder of the Mughal dynasty. It took six years to build and functioned as a congregational mosque which could hold 250,000 people. This is one of a series of 100 photographs, designed to be viewed through a special binocular viewer, producing a 3D effect. The series was sold together with a book of descriptions and a map with precise locations to enable the 'traveller' to imagine that he was touring around India. Stereoscopic cameras, those with two lenses and the ability to take two photographs at the same time, were introduced in the mid 19th century and revolutionised photography. They cut down exposure time and thus allowed for some movement in the image without blurring as subjects were not required to sit for long periods to produce sharp results.