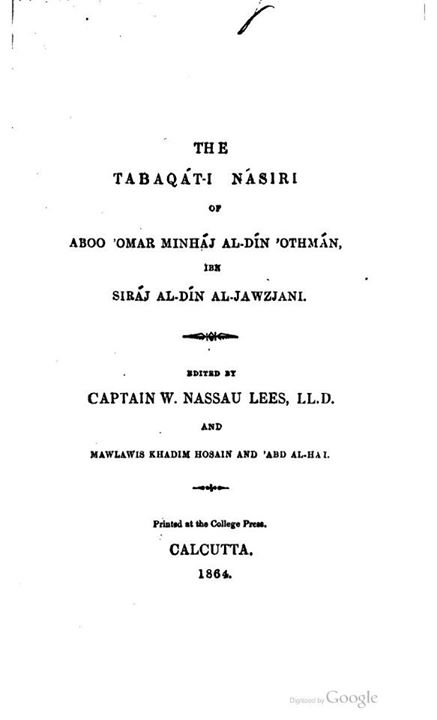 
Evidence in literature suggests that in 1193, the Nalanda University was sacked by BAKHTIYAR KHILJI, a Turk. Muslim conquest in India is seen by scholars as one of the reasons of the decline of Buddhism in India. The Persian historian MINHAJ-I-SIRAJ, in his chronicle the TABAQAT-I-NASIRI, reported that thousands of monks were burned alive and thousands beheaded as Khilji tried his best to uproot Buddhism the burning of the library continued for several months and "smoke from the burning manuscripts hung for days like a dark pall over the low hills."

Minhaj's family originally belonged to Jurjan, on the northwest frontier of Ghor. He was born in about 1193 AD and his father was a Qazi of the Ghorid sultans. Minhaj came to India at the age of 34 and by that time he was fully educated according to the standard of the time and had some experience of diplomatic mission. He came to the court of Nasiruddin Qubacha at Uchch, who appointed him a Qazi. After Sultan Shamsuddin iltutmish had occupied Multan from the hands of Qubacha, Minhaj moved to Delhi.

At Delhi Minhaj found a favourable atmosphere for his genius to flourish and he occupied the posts of Imam, Qazi, Khatib etc and performed his duties efficiently. He came in close touch with the sultans of Delhi, and occupied various posts like principal of madrasas, imam, khatib, qazi and sadr-i-jahan. While holding the office of Qazi of Delhi in the reign of Sultan Nasiruddin Mahmud he wrote his famous book Tabaqat-i-Nasiri, and dedicated it to the reigning sultan. In 1259 AD in his late sixties, he promises to continue his narratives further if health permitted him, but his hopes were not fulfilled. Either his life soon came to an end, or some portion of his book containing the history later to 1259 AD has not come down to posterity.

Tabaqat-i-Nasiri is the only authentic source for the history of Bengal from the conquest of Muhammad bakhtiyar khalji till 1259 AD, when it comes to an end. Other contemporary sources are a few inscriptions and coins. The Tabaqat-i-Nasiri is not only a contemporary book, it is important for two reasons. First, the author had come to Bengal and stayed there for about two years collecting materials for his book and also taking interest in the political matters; and secondly, because he devoted a section (tabaqat) in his book in discussing the history of the foundation of Muslim rule in Bengal. Besides this particular section dealing with the Khalji Maliks of Lakhnauti (from Bakhtiyar to Ghiyasuddin iwaz khalji), he also discussed the history of Bengal under Sultan Shamsuddin Iltutmish and his successors. He also devoted sections to the Shamsi Maliks, ie the nobles of Sultan Shamsuddin Iltutmish, some of whom acted as governors of Bengal. In fact the history of Bengal from the Turkish conquest upto 1259 AD is available only in the Tabaqat-i-Nasiri of Minhaj-i-Siraj.

Minhaj met Malik Izzuddin tughral tughan khan at Kara in about 1242 and thence came to Bengal capital lakhnauti. He stayed in Bengal for about two years and witnessed some important events. He joined Tughan Khan in his wars against Orissa, and acted as a mediator between his patron (Tughan Khan) and Malik Tamar Khan Qiran, governor of Oudh when both were quarrelling among themselves for the possession of Lakhnauti. During his stay at the Bengal capital he collected information about Bakhtiyar Khalji's conquests from his surviving associates. He also utilised the information that he could collect from people at Delhi who took part in battles of the Delhi sultans against the Bengal rulers.

In the Tabaqat-i-Nasiri, the author also gives an idea about the development of Muslim society in Bengal. He says that Bakhtiyar Khalji built mosques, madrasas and khanqahs in the capital, and the nobles also followed his example. Sultan Ghiyasuddin Iwaz Khalji also built mosque and madrasas, he also arranged lectures on Islamic subjects (tazkir), which was delivered by Muslim divines coming from Muslim cultural centres of Central Asia. One such Muslim divine was Jalaluddin son of Jamaluddin Ghaznavi who delivered lectures in the assembly hall of Sultan Ghiyasuddin Iwaz Khalji. [Abdul Karim]

Is there a translation?

Is there an English or German translation of the book?

I have a bangali translation byAKM ZAKARIA of dibbya prakash .

This is the English translation. It is a great piece of work by the Qazi (Chief Justice) in Delhi written during the rule of Sultan Naseeruddin and Balban around 1260).

it is translated by Major Raverty in English in two volumes.