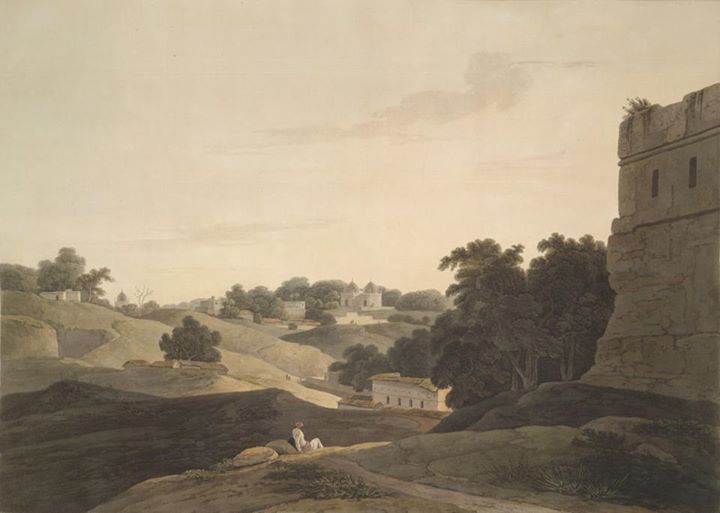 Plate 12 from the fourth set of Thomas and William Daniell's 'Oriental Scenery,' which they called 'Twenty-four Landscapes.' The views progress northwards from the far south at Cape Comorin to Srinagar in Garhwal in the Himalaya mountains. Kannauj was an important centre under Harsha, the most powerful ruler of Northern India in the early 7th century, and it later became the capital of the Pratihara dynasty. Looking at the ruined tombs in the distance the artists lamented that '...It is impossible to look at these miserable remnants of the great city of Cannoge without the most melancholy sensations, and the strongest conviction of the instability of man's proudest works.'

There is always something so inviting about the Daniell work - I feel I want to step into the picture.

Ahh, the perverse pleasure of ruins!

Kannauj. You can walk to this exact spot today. The ruined wall on the right is still as it looks here. There is a Shiva temple around that building in the foreground. Where that guy sits & the next hill beyond him, has habitation now. The ruined tombs in the distance are still ruined tombs in the distance. The mounds in front of the tombs are under ASI (Archaeological Society of India) & like much of Kannauj, await excavation. Melancholy sensations you can still feel, at Kannauj..

Hello Ms. Waterfield. The reason why you feel like you could step into the paintings of the Daniells is perhaps because they were designed to evoke such a feeling. There was much discussion about romantic approaches to art in the late 18th century, to which they were clued into. Thomas Daniell had had experience in English landscape painting depicting gardens of country houses in a style that tended to be romantic - largely picturesque as opposed to the aesthetics of the beautiful or the sublime, their 'technical' definitions being alluded to here, against colloquial ones - before he set off to India. Moreover, he was not a company artist and hence depended on English aristocratic and similarly genteel patrons to set himself up upon return. Thus, he had to conform to their artistic tastes, already whetted by picturesque renditions of their estates - they being rougher than the seductive and controlled lines of the beautiful but not as rough as the transporting, overwhelming settings of the sublime. Depictions of landscaping prospects of gardens demanded a "staffed" (i.e. peopled) foreground, the primary subject in the mid-ground and country foliage as the background. It is interesting to contrast Daniells works with those of another English romantic artist in India who had arrived back in England a little before their departure: William Hodges. Though neo-classically trained, he eschewed such a regimented approach to painting vistas when on earlier journeys to exotic lands, and bought along a strong taste of the sublime to his work in India. His renderings are thus impressionistic, with violent contrasts of light together with rude surroundings of rocks and flora at the expense of architectural accuracy. In comparison, the Daniells tended to be less shocking to tender sensibilities while being more accurate, employing the camera obscura and the perambulator to set down details of buildings and perspective. As an example, peruse the views of the entrance to Akbar's Tomb by Hodges and the Daniells. The details of the tomb in Hodges atmospheric version bear no resemblance to that of the Daniells, which are more authentic. Hodges': http://bit.ly/1216obH Daniells': http://bit.ly/17tUmtG

wow, shashi kolar. The Daniells used a gizmo of their times, the camera obscura , to add depth. Here too, the tombs look farther than they actually are/were. I think they've added a hill in the distance. An italian, Antonio Martinelli has spent 3 years roaming around India ( all funded by european grants) to go to the precise locations ( approx. 190) where the Daniells sat & painted. He has been able to nail down the precise use & creative distortion in the photographs which he has taken. They form an interesting book & photo-exhibition titled " Oriental Scenery" , which exhibited at Delhi IGNCA in last quarter of 2011. Book-lovers note - Martinelli's book was printed by the small Delhi art books retailer/publisher, Timeless Books ( South-Ex , Delhi) 4 to 5 years back. Some copyright issue now because the new release is from some big UK publisher. Few copies of the cheaper version are still available at Timeless. Grab 'em ...

This is why we love RBSI.

Mr. Mathur. While the Daniells have certainly been credited by artists, architects and even cartographers for their accuracy of architectural renditions and recorded details and distances of the routes they took, it looks like they allowed themselves some artistic drift in their compositions. If one studies the watercolor version of another of their paintings at Kannauj on page 96 of 'Early Views of India' by Mildred Archer and compares it with the final print, figure 58, it would be readily seen that the tomb on the right has been moved significantly with respect to the mosque on the left - along with other minor modifications -, while the perspective of the latter remains constant across these versions. The aquatints in London were produced several years after the first sketches and watercolors were produced on location, and the Daniells perhaps chose to reconfigure their compositions a little for a better aesthetic response. The book also states that their perambulator had just been repaired, after a period of malfunction, before they reached Kannauj. I'm not sure if this had anything to do with the apparent perspective distortion that you bring out. Thank you for pointing to the work of Martinelli. The book certainly sounds worthy of purchase, the title of which has been taken after the first 3 offerings of the Daniells to the public, each containing 24 prints.