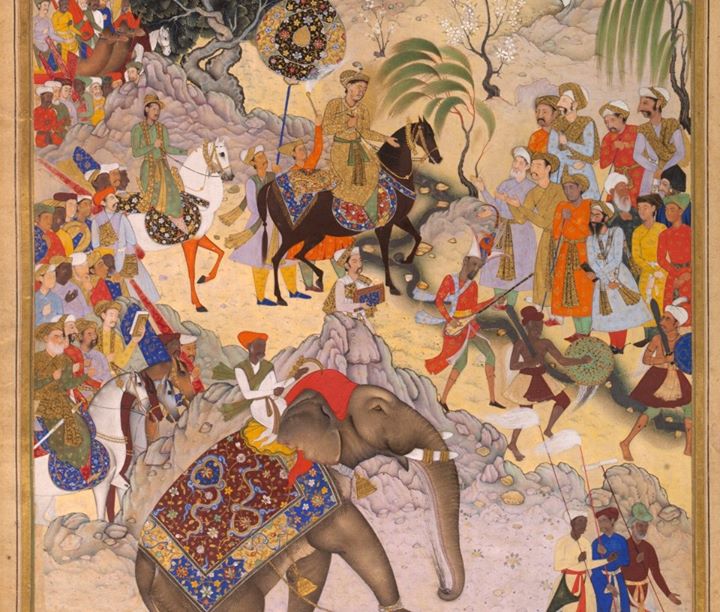 Composed and painted by Farrukh Beg.

This illustration to the Akbarnama (Book of Akbar) depicts the Mughal emperor Akbar (r.1556–1605) riding on a black horse through Surat in western India after taking the city in 1572.

The Akbarnama was commissioned by Akbar as the official chronicle of his reign. It was written in Persian by his court historian and biographer, Abu’l Fazl, between 1590 and 1596, and the V&A’s partial copy of the manuscript is thought to have been illustrated between about 1592 and 1595. This is thought to be the earliest illustrated version of the text, and drew upon the expertise of some of the best royal artists of the time. Many of these are listed by Abu’l Fazl in the third volume of the text, the A’in-i Akbari, and some of these names appear in the V&A illustrations, written in red ink beneath the pictures, showing that this was a royal copy made for Akbar himself. After his death, the manuscript remained in the library of his son Jahangir, from whom it was inherited by Shah Jahan.

ooohh - these carpets on the fil/elephant & the horse which Akbar sits on - fab .... this makes them contemporary of the Ardabil carpet. And Akbar is the one who introduced the wool-pile carpet making in Agra, Lahore & Fatehpur, India ( from Herat/Kirman/Isfahan/Kashan - Iran). Abul Fazl also records with great pride in Ain-i-akbari that " all kind of carpet-makers are settled here & thanks to his majesty, the wonderful varieties & textures made in India are such that ...the carpets of Iran & Turan are no more thought of ". Strange that we dont have a single surviving carpet of Akbar period. Or perhaps some of those pieces in boston, paris, london museums have been incorrectly classified as iranian (because of the herati/kashan motifs & wefts), not indo-iranian, as kamaladevi chattopadhaya suspected. The indo-iranian had bolder colours. And the blue-red royal contrast here suggests that ...wah wah ...