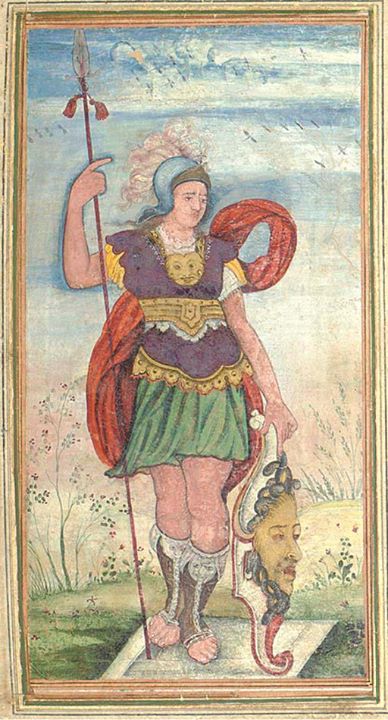 "MINERVA. SCHOOL OF KESU DAS, MUGHAL INDIA, LATE 16TH CENTURY. Gouache heightened with gold on paper, the European-style Minerva stands contraposto, one hand resting on her gorgon-headed shield, the other holding a spear, within a landscape, slightly trimmed, blue, gold, orange, green and white margins, laid on a gold-speckled cream album page, mounted on card, typed note in French pasted to the back. Folio 10¾ x 6½in. (27.6 x 16cm.); miniature: 6 2/3 x 3 3/8in. (16.6 x 8.6cm.).

Lot Notes: One of the more prominent painters in Akbar's atelier was Kesu Das. He could paint in the more standard Akbari mould - with contributions to the Victoria and Albert Akbarnama (circa 1590), but is perhaps best known for his highly coloured copies of European engravings. The resulting studies, in particular of the human anatomy represent a departure from the Persianate cannon of aesthetics. Perhaps because of this he was also one of Jahangir's favourite early artists (Mughal and other Indian paintings from the Chester Beatty Library, London, 1995, p.152).

Looks like derived from something of the Italian Renaissance.

Ummm, not a particularly great painting.

Her face looks like she's from a Mughal miniature.