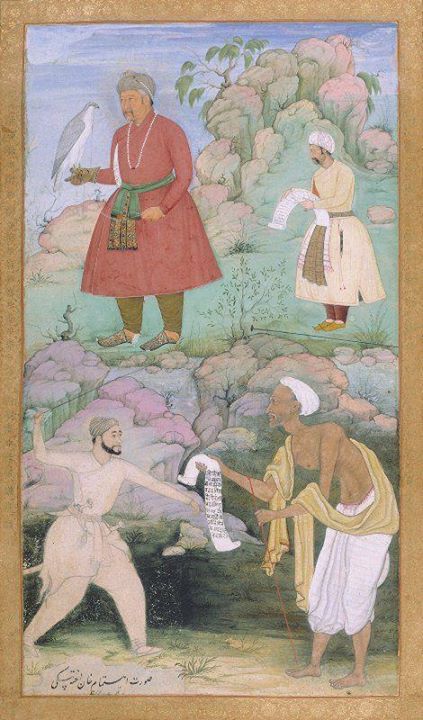 Akbar with falcon receiving Itimam Khan, while below a poor petitioner (self-portrait of the painter Keshav Das as an old man) is driven away by a royal guard: page from the Jahangir Album

An elderly man, stooped and emaciated, holds a scroll of paper upon which is written a salutation to Emperor Akbar – seen above – along with the artist's name and date. Surprisingly, it is written in Hindi in devanagari script, not Persian, the language of the Mughal Court. This inscription makes clear that the humble petitioner is the artist himself. With great skill, Keshav Das created a rocky landscape in the Timurid manner to provide a two-tiered setting for his subject, ostensibly a scene depicting the emperor receiving a court petitioner but in reality, concerned with the artist's plight and a sense of injustice. He is being prevented from meeting the emperor by a hostile guard in a scene that must be read as allegorical.