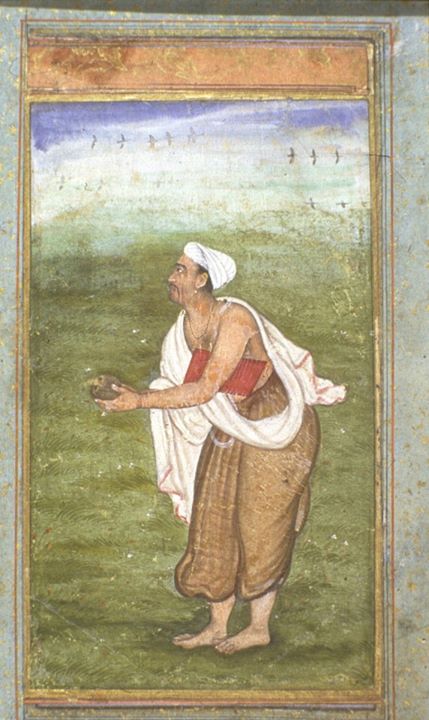 
The Hindu painter Keshav Das was an early local entrant into Akbar’s atelier, probably at the instigation of the Iranian master painter Khwaja ‘Abd al-Samad, who oversaw the studio at this time and had been instrumental in recruiting widely in order to complete the monumental Hamzanama project (1557–58 to 1572–73). He proved to be a prolific artist, producing major contributions to many imperial volumes, including an edition of the Ramayana (Jaipur Palace Museum) to which he contributed no less than thirty-five full-page compositions. Akbar ranked Keshav Das fifth in the imperial studio, according to Abu’l Fazl’s official history of the reign. While Mughal painters had a habit of inserting their self-portraits discreetly into the margins of crowd scenes, Keshav Das created an early self-portrait in which he is the sole subject and a later work in which he shares the stage with his emperor and patron, Akbar. Skilled in the Mughal conventions of blending the strong Indian palette with the soft pastel tonality of Timurid courtly styles, he was equally at ease applying these skills to Islamic, Hindu, or indeed, Christian subjects.

Keshav Das is remembered most however as the preeminent and creative explorer of the European mode at the Mughal court. Akbar encouraged Jesuits and western diplomats to circulate Christian imagery at court; in 1580, he invited a Jesuit delegation from Goa that presented printed bibles and religious oil paintings to the emperor. Jahangir continued this interest, actively collecting Flemish and German engravings that were made accessible to his court atelier. English Ambassador to King James I, Sir Thomas Roe, presented miniature cameo portraits that engaged the attention of Jahangir, who immediately had them copied. With their use of linear and atmospheric perspective and an intense interest in portraiture, these works stimulated numerous local copies and adaptions, and Keshav Das was regarded as the master interpreter of them.

Most significantly, European art at the Mughal courts triggered an awareness of alternative pictorial solutions, particularly the use of chiaroscuro and spatial depth. Undoubtedly, the heightened Mughal interest in portraiture of this period was stimulated in part by that exposure. Keshav Das’s receptivity to European art went beyond that of his contemporaries; he explored the tonal modeling of musculature in new ways and brought an innovative approach to landscape, especially the creation of middle and far distance through the subtle use of perspective and atmospheric effects.

© The Metropolitan Museum of Art

Of course Brahmins are supposed to get food only by begging. It symbolises shedding of the last bit of ego in a human being. Sorry I thought you asked the question in its seriousness rather than as a sarcasm

i think he is putting something out for the birds! not begging!

No Brahmins NOt supposed to get food by Only begging and as shown in this picture they wont take attire of emperor while begging....