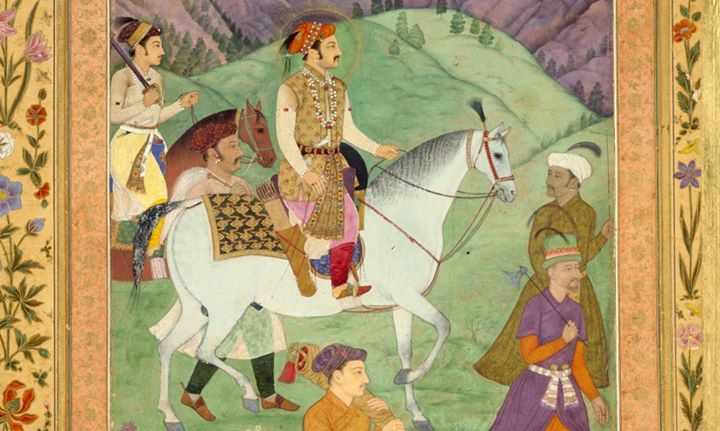 This painting depicts the Mughal emperor Shah Jahan (r. 1628-1658) riding on a pale grey horse through a landscape accompanied by a prince behind him, also on horseback, who is presumably his son, Dara Shokuh. Various retainers are on foot. The painting has been mounted on an album with floral borders, and has a pale pink border with gold scrolling decoration containing an attribution to Jahangir's leading artist Manohar in black ink at the bottom. Overall, the painting has Manohar's distinctive colour palette, and is in the style of the reign of Jahangir, of whom this must originally have been a portrait. However, minute inscriptions in black ink above the head of the brown horse, and beneath Dara Shokuh's left hand, specify that the faces are the work of a different artist, Murar, whose known work falls during the reign of Shah Jahan after his accession in 1628. Thus, the original bodies of Jahangir and a different prince have been replaced with those of Shah Jahan and, presumably, his son Dara Shokuh, for reasons that remain unknown.

The face of the emperor is almost certainly that of Jahangir, whatever the inscriptions may say

You may be right Michael! Especially since Shah Jahan sports a beard in almost all his paintings and Jahangir is always clean shaven with his trademark mustache. But in this image of 'Shah Jahan as Prince Khurram (1592-1666; r. 1628-58)' - From the Minto Album... the young Shah Jahan looks almost identical to one the posted above: http://bit.ly/16vBZTQ

This is a beautiful print - of whomever it may be!

other Jahangir features: slightly heavy jowled with a `3 oclock shadow', downturned moustache, pearl ear ring, pearl string around his turban. I wouldnt mind betting that the young prince behind him is the young Prince Khurram (later Shah Jahan) and not Dara Shikoh

Hi Frank, yes I've seen almost every portrait of Jahangir from all ages, in public collections and although their are similiarities between him and the young Shah Jahan I think I am right about the above

Michael with the kind of credentials you have who can have any doubts about this. I daresay it is not uncommon for this sort of a thing to be seen when one is closely examining artefacts, paintings, memorabilia and not surprisingly even historical facts.

Hi Michael...pleasure to see you here.

Is it just my observation that in a lot of Mughal era paintings, the animals appear a bit out of scale? Like the small head of the horse relative to its body.