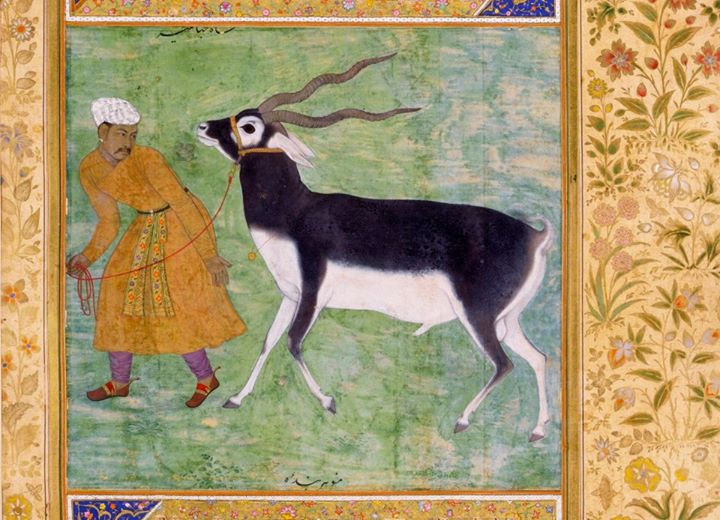 The study of an Indian black buck being led by its keeper was painted by the Mughal court artist Manohar, who signed his work on the green ground at top and bottom of the painting. The posture of the keeper who bends one knee, crouching slightly, while looking over his shoulder, is conceivably inspired by the figure of Joseph in Albrecht Durer's engraving The Flight to Egypt. Engravings by, or after, Durer reached the Mughal court in the late 16th and early 17th centuries, brought mainly by the Jesuits who came from Portuguese Goa, and in several cases were copied directly by the imperial artists.

Little is known of Manohar, but contemporary ascriptions to manuscripts attest to his having entered royal service under the Mughal emperor Akbar (r. 1556-1605) and he became one of the most important artists of his son and successor, Jahangir (r. 1605-1627). Floral borders were added to his painting late in the reign of Jahangir or early in the reign of Shah Jahan, and the page was preserved in a royal album which became dismembered at some unknown date. This folio was bequeathed to the museum by Lady Wantage in 1921.

beautiful...fabulous. Although it is cut but what is written at the top portion is not the signature of the artist. It in fact in my humble opinion is - "Shah Jahangir". Manohar has indeed signed at the bottom...love his work. Thanks RBSI

Thanks a lot for this share.It is nice to see the inter-cultural influence between the art of Mughal and Europe .