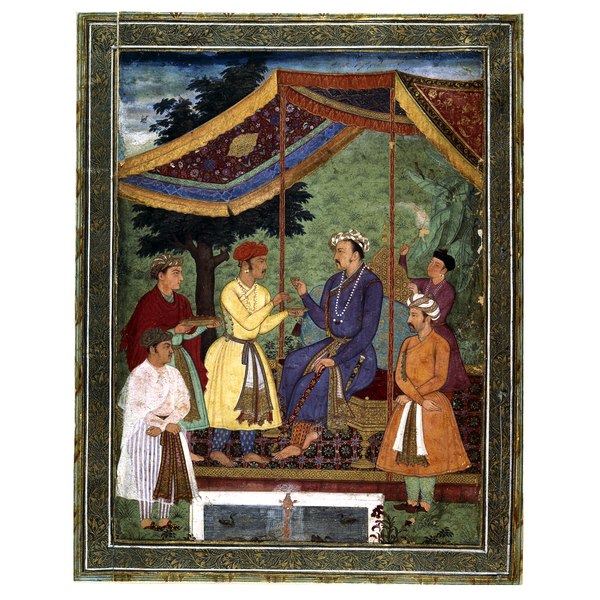 Manohar, Emperor Jahangir receiving his two sons, an album-painting in gouache on paper

Emperor Jahangir (reigned 1605-27) sits under a richly-decorated canopy in a garden, and is served food and drink by his two sons Khusrau and Parviz. Two servants stand in attendance, while a young page stands behind the emperor's throne holding a flywhisk. The five principal figures appear with their bodies in three-quarter view and their heads in full profile, as is typical of full-length portraits at this time. Perhaps inspired by European art, the Mughal emperors encouraged their artists to make particularly lifelike portraits, not only of themselves, but also of members of the court.

Below Jahangir's feet is an inscription reading camal Manuhar ('the work of Manohar'), a court artist. Manohar had grown up in the Mughal atelier: his father was the great master Basawan and probably instructed his son from an early age. Manohar's career began under the reign of Jahangir's father, Akbar (reigned 1556-1605), but his style reached maturity under Jahangir, of whom Manohar is known to have made at least ten portraits.

Chihranami, or painting faces, was the most highly esteemed category of painting at the Mughal atelier, and artists were often ordered to re-paint the faces of figures in older paintings which entered the imperial collection, as in Humayun's Garden Party.

I currently have a big thick paperback on the history of the Mughals waiting to be read!