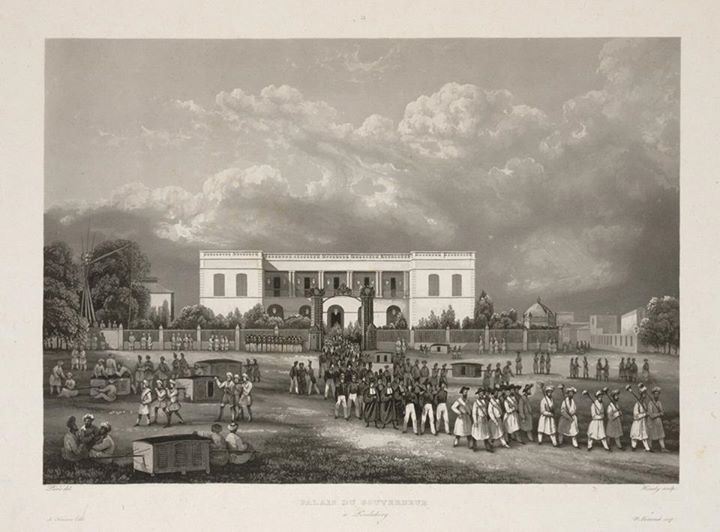 Digital Rare Book:
History of the French in India, from the founding of Pondicherry in 1674 to the capture of that place in 1761
By Col.G.B. Malleson
Published by W.H.Allen & Co., London - 1893

"A COMPLETE and connected account of the doings of the FRENCH IN INDIA throughout the period embraced in this volume has never yet been given to the world. The student and the soldier whose curiosity and whose interest may have been alike aroused by the outline of
the deeds of Dupleix and of La Bourdonnais, of Bussy and of Lally, given in the pages of Mr. Mill's History of India, and who may have felt anxious to learn something more of the policy and aims of those famous Frenchmen, have hitherto been compelled to fall back for such information upon the voluminous work of Mr.Orme. Of the historical value of this work there can be no doubt. Mr. Orme was a member of the Madras Council and had access to all the Madras records, besides enjoying, as a contemporary, the opportunity of conversing with many of the actors of that stirring period. Of the feelings of the English in Madras, of the principles which animated their leaders civil and military, of the movements of their fleets and armies,his history is a most full and detailed, and, I believe, generally a faithful, record. Yet, with all this, Mr.Orme's work, judged even from an English point of view, constitutes rather a compendium of information for others to use, than a history which in the present day would commend itself to the general reader. It is often diffuse even to prolixity, and brings into prominence actions not mainly affecting the current of the narrative, and such as in the present day would be interesting only to the student of individual character. At the same time, whilst it indulges in the fullest details regarding the exploits of the ensigns and lieutenants who assisted Olive and Lawrence in annihilating the schemes of Dupleix and Lally, it regards the French rather as accessories than as principals in the story, seldom entering at any length into the reasons of their military movements, never conveying to the reader any fixed idea of the policy by
which the rulers of Pondichery were guided. Throughout the work, indeed, there is a natural but entire want of sympathy with French aspirations. Even Orme, therefore, full and explicit as he is regarding the doings of the English, would fail to satisfy the inquirer for a complete and connected account of the deeds of the French in India.

Nor is the omission supplied, so far as I am aware,
by any French history. The most valuable of these that I have met with in my researches is the Histoire des Indes Orientates by the Abbe Guyon, published in Paris in the year 1744. The value of this work consists mainly in the long and copious extracts given by the author from the archives of Pondichery, and in the correspondence, also inserted, between M. Dumas and the Native Princes of India. The supplements to the memoirs of La Bourdonnais, of Uupleix, of Lally, of Bussy, of De Leyrit, of Moracin, and of many others, give at full length the official correspondence of the various periods. These, likewise, form an excellent basis upon which to found a history, but there are few who would take up such works for amusement, or who would consider the trouble of wading through so many bulky tomes, all of them more than a hundred years old, compensated for by the information they might impart."

wow this is outstanding .

Sushil, I would love to read this gem. How are you, Anju and Armaan?

What if Francew Won in Europe; and Dupleix had ascended in India?

Probably much better for all the world.