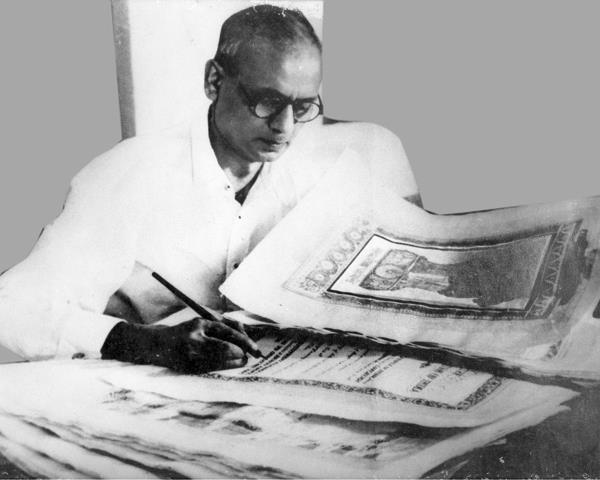 Article:
The Constitution long before the review
By H.Y. Sharada Prasad
Spectrum - March,2000

WHO is the author of our Constitution? To that, many people would say: "What a question! Every one knows it is Dr Ambedkar."

But Ambedkar himself shied away from claiming that title for two reasons. One, as he often pointed out, he was only giving expression to a consensus that had been reached after many compromises in the Drafting Committee of the Constituent Assembly. Two, he could not hide the fact that in many areas the Constitution fell far short of what he would have liked.

But there is one man who literally wrote our Constitution. His name, little known, is Prem Behari Narain Raizada (Saxena), son of Brij Behari Narain Raizada of Delhi, although the family originally came from Rampur. The Constituent Assembly, which met on December 9, 1946, concluded its labours and adopted the Constitution on November 6, 1949. The entire document was then written out in his own hand by Prem Behari in a flowing italic style in the best calligraphic tradition of our country.

This original version was then signed by all the members of the Constituent Assembly in January 1950. The Constitution itself came into force on the 26th of that month. Photolithographed copies of it were then made at the office of the Survey of India in Dehra Dun.

Great Moment! Thanks for sharing1

The original Constitution writer The original constitution of India was handwritten by Prem Behari Narain Raizada.Though we all know that B.R. Ambedkar was the architect of the constitution; one man can be held responsible for literally writing the constitution in his own inimitable calligraphy. Little is known about Prem Behari Narain Raizada (Saxena) of Delhi who wrote the entire constitution in a flowing italic style in the best calligraphic tradition of our country. Prem Behari Raizada was born in Delhi in the family of Ram Parshad (grandfather) an eminent scholar of Persian and English. He was a great calligraphist too. Shree Prem Behari learnt calligraphy from his grandfather who brought him up along with his four brothers after his parents died. He graduated from St. Stephens Delhi and joined M/s Govan Brothers. While being selected for this big honorable job, Jawahar Lal Nehru asked him what he would like to charge for the job. Prem Behar replied “Not a Single Penny I need. By the grace of Good I have all things and quite happy with my life. But I have one reservation, that on every page of constitution I will write my name and on the last page I will write my name along with my grandfather’s name.” His wish was granted and he started working. The task was completed in 6 months. 254 pen-holder nibs were used and No. 303 Nib was used for this calligraphy. The original version was then signed by all the members of the Constituent Assembly in January 1950. The Constitution itself came into force on the 26th of that month. Photolithographed copies of it were then made at the office of the Survey of India in Dehra Dun. Read more: http://bit.ly/WClLmg

Any photos of Nandalal Bose's chapter covers of the Constitution.Had done a story on it years ago.It is stunning.

Did Ambedkar ellaborate in which the constitution fell short for him?

Tisha Srivastav: ...it has been scheduled for posting at 6.30 pm today.

Our constitution is the longest in the world, with 44 articles, 12 schedules and only 94 amendments till date. The American constitution is the shortest. The earliest form of a constitution in the world was found in Iraq to be dated 2300 B.C. The Indian constitution (a young nation that we were for the first time) is often called a bag of borrowings—it has taken various features and parts from other constitutions. The concepts of Liberty, Equality and Fraternity was taken from the French constitution, the concept of 5 year plans was taken from the USSR, the Directive principles (socio-economic rights) were taken from Ireland, the law on which the Supreme Court functions was taken from Japan and a lot more other concepts were borrowed from other countries. The word "socialist" along with "secular", were added to the Pre-amble of the Constitution much later, ostensibly to reflect the rationale for the policies of the Indira Gandhi government during the Emergency.

I have a few hours of spy films that were shot through Partition Day (1947) that I believe show him with Indira Gandhi. The films that I have tell an untold story of India's freedom; featuring . I am hoping that when I am finished with my research, that my project will be at a level that could attract Shekhar Kapur to direct. http://autozombies.com/robinsonfilm.html

Dean Robinson: That's most interesting! Thanks for sharing.

@ Arindam Sen, have you written a longer piece on the Indian constitution. I would love to read it. @Dean "show him with Indira Gandhi" and "an untold story of India's freedom; featuring"...have these been left ambiguous purposefully?

@ This original version was then signed by all the members of the Constituent Assembly in January 1950. The Constitution itself came into force on the 26th of that month...... I am not sure if this is correct ! Art. 5,6,7,8,9,60,324, 366, 367, 379, 380, 391, 392, 393 & 394 of the constitution came in to force on 26-11-1949 itself. As the preamble itself proclaims: We the people of India, having solemnly resolved to constitute India into a SOVEREIGN DEMOCRATIC REPUBLIC and secure to all citizens: JUSTICE, social economic, and political, LIBERTY of thought, expression, belief, faith, and worship; EQUALITY of status and of opportunity; FRATERNITY assuring the dignity of the individual and the unity of the Nation; IN OUR CONSTITUENT ASSEMBLY this twenty-sixth day of November, 1949, do HEREBY ADOPT, ENACT AND GIVE TO OURSELVES THIS CONSTITUTION. I suppose, all the signatures were affixed on 26-11-1949.

The words SOCIALIST SECULAR were added after SOVEREIGN & the words and integrity were added after unity by the 42nd Amendment to the constitution on 3-1-1997. Ironically during the Emergency !

I personally feel the above amendment is illegal as it makes one believe this is how the original preamble was written. Besides when the theory of Basic structure was propounded post Keshavananda case in 1973 to save it from the onslaught of rampage unleashed by Mrs. Gandhi, it was held that Preamble was part of the Baisc structure of the constitution and hence is beyond the amending powers of the parliament. But ironically when the fundamental rights of the citizen were suspended this Basic structure itself was amended . However, due to the lofty words used, no one seems to have the gumption to declare it as unconstitutional !

I also do not subscribe to the oft repeated belief that Dr. Ambedakar is the architect of our constitution. For one, it incorporated much part of Government of India Act, 1935. Incidentally Winston Churchill famously characterized the above Act as " a gigantic quilt of jumbled crochet work , a monstrous monument of shame built by pigmies". Secondly Constituent assembly had some very eminent legal luminaries who have enriched the work by their contribution and Dr. Ambedkar was just the chairman of the drafting committee by virtue of he being the Minister for Law at that time. But I agree with first part of Churchill's statement that it is a a gigantic quilt of jumbled crochet work !

What about the other members of the drafting committee ? They too must have had a role.