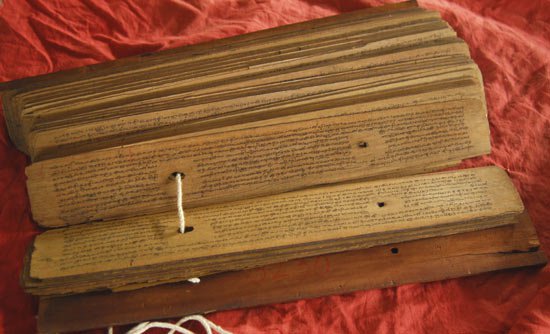 The Oriental Research Institute was set up in 1891, as the Mysore Oriental Library. It housed thousands of Sanskrit palm-leaf manuscripts. Shamasastry, the librarian, examined these fragile manuscripts daily, to determine their contents and catalogue them.

In 1905 he discovered the Arthashastra among a heap of manuscripts. He transcribed, edited and published the Sanskrit edition in 1909. He proceeded to translate it into English, publishing it in 1915.

The manuscript was in the GRANTHA script. Other copies of the Arthashastra were discovered later in other parts of India.

It was one of the manuscripts in the library that had been handed over by 'a pandit of the Tanjore district' to the Oriental Library.

Until this discovery, the Arthashastra was known only through references to it in works by Dandin, Bana, Vishnusarma, Mallinathasuri, Megasthenes, etc. This discovery was "an epoch-making event in the history of the study of ancient Indian polity". It altered the perception of ancient India and changed the course of history studies, notably the false belief of European scholars at the time that Indians learnt the art of administration from the Greeks.

GRANTHA script is an ancient traditional writing system that was used in Tamil Nadu to write Sanskrit.This is a handwriting practice book for the Grantha Script. The title in Tamil is Granthakshara Kaiyezhuththu Payirchi Puththagam. Read Book Online : http://www.archive.org/details/GranthaLipiHandwritingExerciseBook Download pdf Book : http://ia600504.us.archive.org/13/items/GranthaLipiHandwritingExerciseBook/Grantha-HandwritingPractice.pdf

"Just few days back I personally saw this very document of Kautilya"discussed here, which is actually a rewritten one at a later date by some, then xyz scholar.

dear RBSI the download as well as read links arent working ...can u please please solve the problem or give alternate link thanks