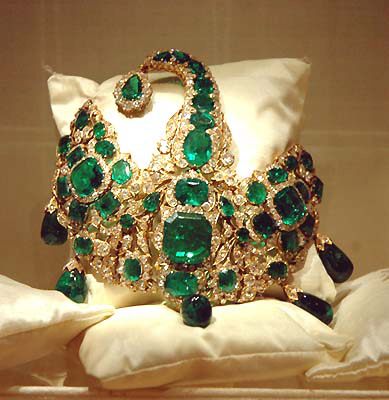 Just the fact that there is jewellery worth over Rs.15,000 crore under one roof is staggering. Even if one doesn't consider the cost, the sheer magnificence of each of the exhibited pieces is enough to leave one speechless with awe and wonder. In Hyderabad, which is keeping up to its reputation of being a happening city, the two- month long exhibition of diamonds, rubies, emeralds, sapphires and pearls, resplendent in all their glitter and colour, re-kindle memories of Hyderabad heritage. Belonging to the Asaf Jah dynasty, which was established in 1724, the jewellery has a historic past, and a colourful one at that.

It was in 1972 that the jewels of the Nizams of Hyderabad, rumoured to be one of the most exceptional collection, were offered for sale to the Government of India for Rupees 218 crore. The deal was struck. However, it has taken almost 23 years to finally acquire the jewels, after prolonged court cases and colossal expenses.

First, the jewels were shifted to the vaults of the Reserve Bank of India from the Hongkong Bank where they were being held earlier. Later, the jewellery was exhibited for the first time at the National Museum in New Delhi for about two months during September - December, 2001.

The 173 piece collection was built up over seven generations of the Asaf Jabs or the Nizams as rulers were called. Although the Nizams ruled over the Deccan, they had adopted the lifestyle, court traditions and administrative practices of the Mughals.

The jewellery, therefore, is a synthesis of Mughal, deccani, as well as European influences. It reflects the ethos of a dynasty that originated in the Mughal court, ruled the Deccan and was a staunch ally of the British empire. It was during the seventh and the last Nizam's -Mir Osman Ali Khan- time that care was taken to preserve the timeless treasure. It was difficult for the Nizams, who had a large family and a retinue of servants, to take of their own.

Nice to see this collection is intact and once again on display. I saw it when it was in Delhi.

Nizam's jewels The jewellery collection that once belonged to the Nizam of Hyderabad arrives in New Delhi for public display. PURNIMA S. TRIPATHI in New Delhi - 2001 THE government's decision to display at the National Museum the jewellery collection that once belonged to the Nizam of Hyderabad has created much excitement in New Delhi. One of the most fabulous collections of its kind in the world, it was kept in the safe vaults of the Reserve Bank of India (RBI) in Mumbai owing to protracted litigation over the treasure. The date of the exhibition itself was initially a highly guarded secret. Officials of the Ministry of Culture and those of the National Museum were tight-lipped about it, for "security reasons". THE royal treasure left the palace of the seventh and last Nizam, Mir Osman Ali Khan, in 1948, shortly after he decided on the princely state's accession to the Indian Union. He created two trusts and stipulated that the jewels should not be sold during the lifetime of his eldest son Azam Jah. At his instance, the jewellery was kept in the vaults of the Flora Fountain branch of the Hong Kong and Shanghai Banking Corporation in Mumbai and the trusts paid a sum to the bank for the care of the collection. The trusts decided to sell the jewellery in 1970, after the death of Azam Jah. Litigation began in the Supreme Court in 1979 when news broke about the trustees' attempt to auction a part of the collection (Frontline, January 27, 1995). Auctioneers from all over the world were invited to New Delhi, but the auction was stopped at the intervention of Union Education Minister Dr. Karan Singh and the late Dr. Laxmi Prasad Sihare, who headed the National Gallery of Arts. Sihare convinced Karan Singh that the jewellery collection was part of the national heritage and hence could not be allowed to be auctioned to foreigners. As the auction was about to begin, Sihare arrived with a stay order and stopped it. Litigation continued for 16 years. Sihare took over as the Director-General of the National Museum in 1984 and personally pursued the case until he retired in 1991. He passed away in 1993. The government of India won the case in 1995 and bought the jewellery from the Nizam for Rs.218 crores. The jewellery was kept with the RBI because the government could not decide where to display it. Historians and art lovers who were associated with Sihare describe the Government's move to display the jewellery at the National Museum as a "personal victory" for him. "He has been vindicated after all these years. But for him, the nation would have lost this priceless collection as it did in the case of the Kohinoor," said a close associate of Sihare. Read more : http://www.frontlineonnet.com/fl1815/18150980.htm

Ed Haynes : This is the article of the earlier exhibition.

Yes, there was also a nice coffee-table book (very expensive as I recall) published on the collection. Wish I'd gotten it, but it was one of those books that could stand in AS your coffee table . . . .

They should be put on display in the Salar Jung Museum...

@ Ed Haynes: That coffee table book after a brief hiatus is again available with a even better jacket and it ain't that expensive.

I am sorry to say but few dangling pieces of jewels are missing from this spectacular collection ,this when the collection stands properly catalogued. I noticed this when it was displayed in Delhi.It is being slowly plundered by the govt. officials.

Glad they are safe in Salajung Museum.

its wonderful to know about this master piece jewallary of the world ,it so beautiful ,thanx